Accessibility links
'Wings of Defeat': Kamikaze Stories, Told in Person "Veteran kamikaze pilot" might sound like an impossibility. But some of Japan's World War II suicide bombers survived — and in conjunction with a new documentary, they're touring American schools. 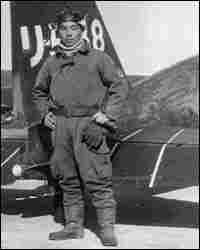 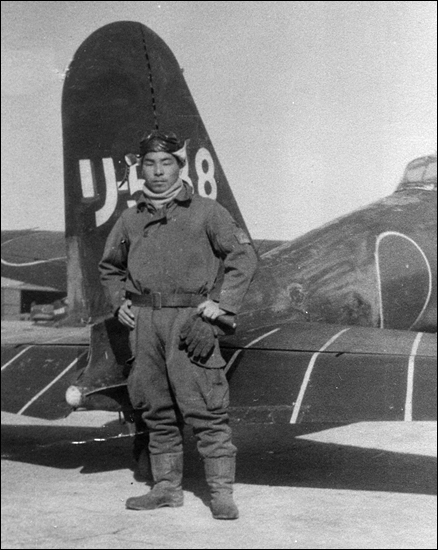 Determined to die: Ueshima Takeo stands beside his plane.

From 'Wings of Defeat'

'It's My Funeral Portrait' 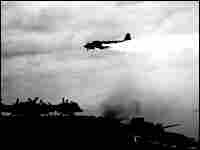 A kamikaze plane goes down in flames in this image captured from the deck of an American aircraft carrier. Courtesy Risa Morimoto hide caption 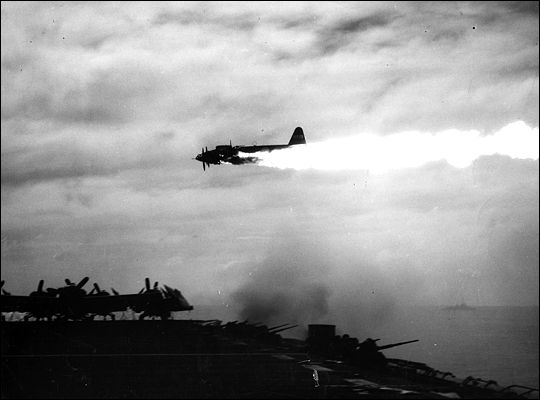 A kamikaze plane goes down in flames in this image captured from the deck of an American aircraft carrier.

"Veteran kamikaze pilot" might sound like a contradiction in terms — kamikaze were, after all, the Japanese warriors trained to crash their planes into Allied targets in World War II. Around 4,000 of them died during the war's last days.

But some kamikaze survived, and several of them have been visiting high schools and colleges around the United States. That has led to unusual scenes: classrooms full of teenagers — black, white, Latino, Asian — all teary-eyed from the experience of meeting elderly men once dedicated to fighting America to the death.

"As good a teacher as you have, no teacher can explain to you how it feels," Warner says. "[That] your family won't be with you ... you know you're not going to win the war, and you're dying because your country told you to."

The former kamikaze on the schools tour are featured in a documentary called Wings of Defeat, which examines the frantic, desperate nationalism that engulfed Japan toward the end of the war. The film makes clear that the kamikaze corpsmen weren't volunteers. Most were drafted as teenagers, barely able to fly.

The kamikaze were told that they were gods, heroes, divinely chosen to save their country. They were beaten and brainwashed. Wings of Defeat includes archival footage of officers exhorting their young charges to die.

Ena Takehiko, one of the men visiting Springbrook, flew two suicide missions; both times his plane crashed into the sea. He still has his funeral portrait — a wrinkly black-and-white photo of a handsome 22-year-old staring down the camera, standing by the cockpit he believed would be his coffin.

Takehiko is 84 now, grandfather-age to the Springbrook students. He speaks to them with one of the Wings of Defeat producers translating.

"You know, at the time the kamikaze strategy was a completely last-ditch resort," Takehiko says. "For every 10 kamikaze planes that took off, nine were shot down by the Americans."

Most of the students say they'd never really thought about kamikaze pilots before. If they had, they shared the thoughts of 18-year-old Vikram Madan.

"I guess my view was that these people were these fanatic people, and this really shows they weren't fanatics," Madan says. "They were human, just like me. They were just doing what they were told to do, and doing it for the love of their country."

This classroom is also where 81-year-old Jack Mock meets 85-year-old Ueshima Takeo. Mock was a seaman on the USS Nashville when a kamikaze attacked it in 1944 and killed more than a hundred people. Ueshima was a kamikaze.

"He did his duty; we did ours," Ueshima says. And Mock agrees.

The nightmare of Hiroshima and Nagasaki hangs heavily over the former kamikaze's conversation. Ueshima tells the students that the atomic bombing of those cities erased his will to be a warrior.

The former kamikaze say they never could have imagined that they would live to discuss their legacy with American high-school students one day — nor could they have expected those students' compassion.

Wings of Defeat is playing at film festivals around the world. Its producers plan to bring it to more American high schools.