Accessibility links
U.S. Shot-Putter Nelson Aims for Olympic Gold Adam Nelson has two silver Olympic medals under his belt, but not a gold. The U.S. track and field athlete is gearing up for Beijing this summer in hopes of taking home the ultimate prize. 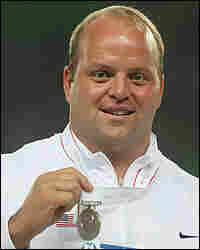 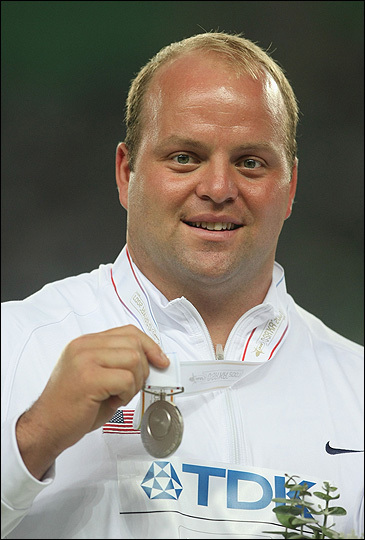 Adam Nelson holds the silver medal he won in 2007 at the IAAF World Athletics Championships in Osaka, Japan. 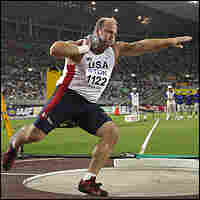 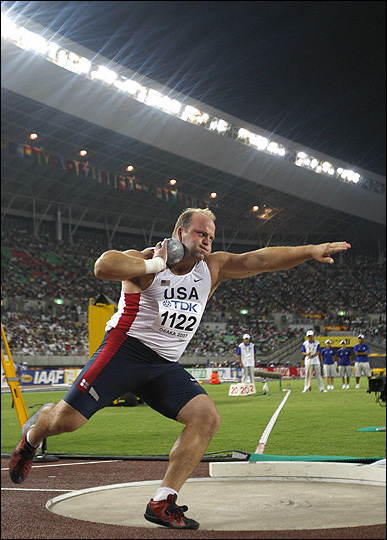 Nelson shows his form in the shot-put ring at the IAAF World Athletics Championships. 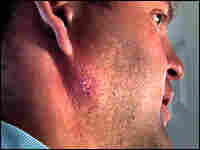 Nelson's skin is discolored below his right ear, where he cradles the shot before he throws. He calls it a "shot-put hickey" and describes it as "a callous, basically." John W. Poole/NPR hide caption

In less than four months, the Summer Olympic Games open in Beijing. The games are surrounded by highly charged political issues between China and Tibet, but assuming there are no major boycotts, an estimated 11,000 sportsmen and women will show up to compete.

One of those athletes is Adam Nelson, one of the greatest shot-putters in U.S. history. He is the only American track and field athlete to win a medal at every major outdoor championship since 2000, including Olympic silver medals in 2000 and 2004.

In March, Nelson failed to qualify for the track and field indoor world championships in Valencia, Spain. Instead, he practiced at the University of Virginia in Charlottesville bundled in gray sweatpants and a blue fleece pullover.

"If I'd gone to Valencia, maybe I wouldn't be as hungry as I am right now," Nelson says.

A competitive hunger gnaws at Nelson because of one wrenching day four years ago.

In the Summer Olympics in Athens, the shot-put at ancient Olympia was the showcase event. Near the end of the competition, Nelson was in first place until Ukrainian Yuri Bilonog tied Nelson for the longest throw.

Nelson had one last chance to break the tie and win. He heaved the 16-pound shot and screamed as he released. The crowd roared. It was far enough for a gold medal, but the throw was disallowed after a judge signaled Nelson stepped over the foot-foul line.

But he was wrong.

"I let the officials know that I didn't agree with their call and I stayed in the circle and waited for a protest," Nelson says. "And I immediately apologized because that was not the right response."

"I remember walking out of the circle thinking 'Man, I don't know if I'm ever going to have another opportunity to compete in an Olympic games ... and it took me about 30 or 45 seconds before I said to myself, I said 'No! I'm gonna go after one more ... and I'm not gonna make the same mistakes that I made this time.'"

In Charlottesville, four years after his experience at Olympia, Nelson is trying to correct his mistakes.

In 2004, he says, he lost the joy of throwing a shot-put. He was practicing often, but without purpose.

Nelson decided he needed change and more balance in his life, so he got married. He and his wife Laci are expecting their first child in September. Nelson also enrolled in business school at the University of Virginia.

And he joined forces with a new coach. Kerry Lane is a former collegiate athlete who left the track for the field.

"I used to be a distance runner," Lane says. "I made the transition to the dark side, and never looked back."

Lane is a rarity in track and field, a world of big guys.

Even Nelson, who is 6 feet tall and 265 pounds, is small when it comes to shot-putters. But he is thick and powerful with a massive neck, where he cradles the shot-put before he throws. The skin is discolored below the right ear. Nelson calls it a "shot-put hickey."

His right hand gets so calloused and swollen from throwing, Nelson jokes it makes him feel like a hulking cartoon character.

"It's clobberin' time," Nelson says, quoting Ben "The Thing" Grimm, the rock-like hero of Fantastic Four fame. "You know when my hand gets like that I'm ready to rumble with something."

Brute strength is part of throwing the shot-put. But so is flexibility and endurance. Nelson says Lane has introduced some stretching and track exercises, a training regimen that Nelson says will probably make him more athletic in the shot-put circle and also help extend his career.

Two months ago, there was compelling evidence that a career which began in the eighth grade was doing just fine at the age of 32. That was when Nelson uncorked the third-farthest indoor throw in history, 10 inches away from tying the world record. Randy Barnes set the world record of 74 feet and 4 and 1/4 inches in 1989, according to the International Association of Athletics Federations.

Nelson promises there is more where that came from for the Summer Olympics, where the shot-put is thrown outdoors. The question is where it will emerge at the very moment he needs it.

Despite his long record of successes, Nelson says his biggest failure is not competing at his highest level on the day of the Olympics four years ago.

The changes in his life may not guarantee a gold medal in Beijing. But the way he's feeling now, it will be "clobberin' time."