Accessibility links
Japanese Pay Less for More Health Care Japan spends half as much on health care as the U.S., yet its people have the longest healthy life expectancy. Diet and lifestyle are key, but affordable health care plays a major role. 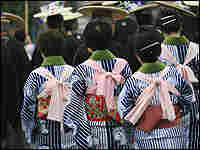 Japan produces cars, color TVs and computers, but it also produces the world's healthiest people. It has the longest healthy life expectancy on Earth and spends half as much on health care as the United States.

That long life expectancy is partly due to diet and lifestyle, but the country's universal health care system plays a key role, too.

Everyone in Japan is required to get a health insurance policy, either at work or through a community-based insurer. The government picks up the tab for those who are too poor.

It's a model of social insurance that is used in many wealthy countries. But it's definitely not "socialized medicine." Eighty percent of Japan's hospitals are privately owned — more than in the United States — and almost every doctor's office is a private business.

Health Care for Anyone at Anytime

Dr. Kono Hitoshi is a typical doctor. He runs a private, 19-bed hospital in the Tokyo neighborhood of Soshigaya.

"The best thing about the Japanese medical system is that all citizens are covered," Kono says. "Anyone, anywhere, anytime — and it's cheap."

Patients don't have to make appointments at his hospital, either.

The Japanese go to the doctor about three times as often as Americans. Because there are no gatekeepers, they can see any specialist they want.

Japanese patients also stay in the hospital much longer than Americans, on average. They love technology such as magnetic resonance imaging; they have nearly twice as many scans per capita as Americans do. A neck scan can cost $1,200 in the United States.

"Well, in 2002, the government says that the MRIs, we are paying too much. So in order to be within the total budget, we will cut them by 35 percent," Ikegami says.

This is how Japan keeps cost so low. The Japanese Health Ministry tightly controls the price of health care down to the smallest detail. Every two years, the health care industry and the health ministry negotiate a fixed price for every procedure and every drug.

That helps keep premiums to around $280 a month for the average Japanese family, a lot less than Americans pay. And Japan's employers pick up at least half of that. If you lose your job, you keep your health insurance.

Japanese insurers are a lot more accommodating than their American counterparts. For one thing, they can't deny a claim. And they have to cover everybody.

Even an applicant with heart disease can't be turned down, says Ikegami, the professor. "That is forbidden."

Nor do health care plans covering basic health care for workers and their families make a profit.

"Anything left over is carried over to the next year," Ikegami says. If the carryover was big, "then the premium rate would go down."

So here's a country with the longest life expectancy, excellent health results, no waiting lists and rock-bottom costs. Is anyone complaining?

Well, the doctors are. Kono says he's getting paid peanuts for all his hard work.

"It's extremely cheap," he says.

Kono is forced to look for other ways to make a yen. He has four vending machines in the waiting room. In a part of Tokyo with free street parking, he charges $4 an hour to park at his clinic.

The upside is that virtually no one in Japan goes broke because of medical expenses.

Personal bankruptcy due to medical expenses is unheard of in Japan, says Professor Saito Hidero, president of the Nagoya Central Hospital.

But while the patients may be healthy, the hospitals are in even worse financial shape than the doctors.

So here's the weakness: While the United States probably spends too much on health care, Japan may be spending too little. In a country with $10-a-night hospital stays, prices just aren't high enough to balance the books.

Hospital prices too low? That's a problem a lot of countries would like.

Frontline Report: Sick Around the World