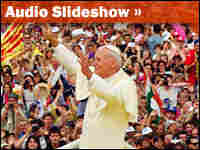 Audio Slideshow: Popes Who Have Taken the Papacy Global

Pope Benedict XVI arrives Tuesday night for his first trip to the U.S., and although most American Catholics know little about their new pontiff, they're still flocking to New York City and Washington, D.C., to see him.

The enthusiasm was quite unbridled among the 250 singers gathered at St. Mark's Catholic Church in Hyattsville, Md., on a recent Monday evening. They were not professionals — just people from parishes in the Washington metro area — but they were motivated: They auditioned for the choir, practiced for hours and memorized 134 pages of music. All for a chance to sing for the pope Thursday at Nationals Park, the new baseball stadium.

At a rehearsal three weeks before their performance, choir director Tom Stehle ran a tight ship, stopping singers mid-note to correct their pronunciation, scolding them for still reading when the music should be memorized.

During a break, Ann Ingram described her anticipation for the stadium Mass. "We come on Sundays and we get premium gas," she said of a routine Mass. In comparison, she hopes the stadium Mass will be "premium high octane for a Lamborghini."

Mark Hammett, a science teacher, says he knows little about the current pope. But Hammett missed the chance to see his predecessor, John Paul II, who he says became "part of my life."

"Now, Pope Benedict is still early in the papacy," Hammett says. "I doubt he'll have as long a papacy as John Paul the Great had, but I still feel that affinity. He's the pope. He's the papa."

"At first, honestly, I thought he was more strict and legalistic," she notes. "But the encyclicals that he's been writing are on hope and love and all these wonderful virtues."

Like the singers and their music, Pope Benedict is working on his image. He has a lot of ground to cover. Before he was elected pope in 2005, Cardinal Joseph Ratzinger was known as a dogmatic disciplinarian.

"I think people will be surprised by his grandfatherly personality," says George Weigel, a senior fellow at the Ethics and Public Policy Center in Washington, D.C., and author of a biography of the pope. "People who don't know who this man is, who have the cartoon Ratzinger in their heads, will be surprised by what a mild-mannered, gentle, friendly soul he in fact is."

Polls suggest American opinion is already softening toward Benedict. Surveys sponsored by the Pew Forum on Religion and Public Life suggest that many people, including church-going Catholics, know virtually nothing about this pope. But those who do know about him like him: 74 percent of those polled say he's doing a good job.

"Now that's still 10 percentage points lower than the high point of the American public's view of John Paul II," says Luis Lugo, director of the Pew Forum. "But it is comparable to American's favorability toward Billy Graham."

A Church in Transition

When Benedict arrives, he will see a large U.S. Catholic Church, but one that is changing. A Pew Forum survey shows 24 percent of Americans identify themselves as Catholic, a percentage that has been constant since the 1970s. Latino immigrants have stabilized that amount, because many native-born Catholics have left the faith of their childhood.

At Georgetown University, a Jesuit institution in Washington, D.C., junior Maria Malvar says she used to be involved in church. She thought Pope John Paul was a rock star, but she dislikes Benedict's strict theology.

"I believe Pope John Paul II did a lot to bring youth back to church," Malvar says. With Pope Benedict, she says she feels "a regression."

The observation draws a nod from her friend, Billy Dumay. "I feel he'll do the Catholic guilt trip," Dumay says, laughing.

Dumay sees faith as personal worship, not a set of rules. And he's not thrilled with Benedict's battle against secular culture. "Ending secularism to him means actually going to church, going through formal motions, and if you don't do that you're not a good Catholic," Dumay says.

Other students at Georgetown disapprove of the pope's stances on such issues as birth control, women's ordination and outreach to other faiths. Then there's the sex-abuse scandal. At least two bishops asked Benedict to meet with victims and to visit Boston, where the scandal broke.

But Sarah Kinsella, a medical student, believes Benedict is delivering God's message to a materialistic nation. "He strikes me as a holy man of God and I feel very proud to be a Catholic with him leading the church and being the face of Christ on this earth," Kinsella says.

Rob Chedid, a sophomore and business major, says the pope must be tough.

"Otherwise the dogma of the church falls apart," Chedid says. "It's everything we're founded on."

Chedid hopes the visiting pope will focus on foundational teachings of love, hope and harmony — precisely what the choir members rehearsing at St. Mark's parish are striving to achieve.

"I hope he imparts how much God loves us, but at the same time encourages people to take their faith seriously," choir member Colosi says. "He can inspire that in us."

Paula Casey pauses for a beat: "I'd like to hear him say he loved the music," she says.