Turkey's top prosecutor is making a play to ban the country's democratically elected ruling party from government. It's part of a long-running power struggle between secularists and Islamists. 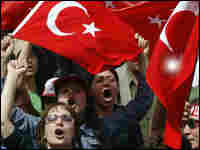 Tens of thousands demonstrated in the Turkish capital Ankara to defend the country's secularist tradition amid simmering tensions over an attempt to ban the Islamist-rooted governing party. Adem Altan/AFP/Getty Images hide caption

What if supporters of one political party in this country decided to just bounce the other political party? Seriously. What if Republicans or Democrats decided about the other, you know what? We've had it with you? We think you're trouble for our future, we think you're endangering the constitution, and we are going to figure out a way to dismantle you.

In Turkey, the top prosecutor is using the court system to make a play to ban the country's democratically-elected ruling party from the government. It's an Islamist-based party, and opponents say it's violating the country's secular constitution. To explain a little more about this, because there is a little more to be explained, NPR's Ivan Watson joins us this morning from Turkey. Hi, Ivan.

IVAN WATSON: Hey, Alison. How are you?

STEWART: I'm doing just great. I'm going to set a little background and then I'm going to let you go. Turkey's chief prosecutor is trying to ban the AKP. Now, that's the ruling party. They're trying to ban it from the government for the next five years.

WATSON: Well, it is a little complicated. Basically, Turkey is a country that is overwhelmingly Muslim, but the system of government here is very, very strictly secular, and it's been that way for 80 years. But what happened is about six, seven years ago the AKP Party led by a man named Recep Tayyip Erdogan, who's now the prime minister of Turkey, was popularly elected, and they've continued to win elections ever since 2002.

And they are rooted in political Islam, though they deny that they have an Islamist agenda, and they are frequently accused of trying to secretly change Turkey, change its system into an Islamic republic like Iran. That is a charge that the prime minister has frequently denied, and the latest round of this is that several pillars of the secular system here, institutions like the court system, or the university system.

Or the most powerful secularist institution in this country is the military - in this case it is the judiciary and the courts that are now threatening to basically dissolve this AKP Party, and ban Prime Minister Tayyip Erdogan from politics for the next five years.

STEWART: So, just so everybody understands, you've got the AKP Party on one side, who are Islamists, and the other side you have the universities, the military, and the courts, who are the secularists. Is that right?

WATSON: That's - yeah, you could kind of break it down that way. Now, you really have to put some emphasis on the military. The military has overthrown four governments in the last 50 years. The military has been behind the banning of many political parties in this country, and they are frequently seen as the force kind of that is operating behind the scenes right now. As one analyst put it it's like the military was outsourcing this power play against the AKP to the judiciary.

STEWART: Now, the prosecutor has accused the AKP of planning to turn Turkey into a country ruled by Islamic law, and as with many big picture issues sometimes one act can kind of signify the struggle, in this case a proposed constitutional amendment to lift the headscarf ban in schools. Can you explain why this would be a touchstone in this story about party power struggles?

That's a very polarizing issue, and for many secularists that's an example. That's proof that the AKP is trying to turn this country into a country like Iran, though AKP supporters say no, this is just a question of human rights, freedom of expression. You should be able to wear what you want to school.

STEWART: What we have here is a democratically-elected Islamist ruling party reforming, promoting tolerance, some would say. So, why would the opposition want to create instability within Turkey?

WATSON: That's another good question. There - some observers here say that the secularist opposition is simply paranoid that they're really - others say that they seem to be afraid of losing power. You know, there's a bit of a class struggle here. The AKP not only symbolizes more religious people, or represents more religious people in this country, but they also represent people who haven't traditionally had a position in the state bureaucracy.

And they also try to promote better relations with the long oppressed Kurdish minority, the ethnic Kurds of this country. That has scared the secularist establishment. This isn't the first time we've seen a power play against the AKP. Just last summer you had the courts, backed by the military, try to block an AKP candidate from running for president, and they effectively annulled elections, presidential elections.

STEWART: Wow, so then, why is the current party in power still? They got around it?

WATSON: Well, that was presidential elections, and they did get around it.

WATSON: You know how they did it? They declared snap general elections, and they won them. They won them by almost 50 percent of the vote, and then managed to put their guy, the same guy, into the post of president. So, this has been kind of seen as a counterattack by the secularists, this court case to ban the AKP.

STEWART: I'm going to pull back a little bit, Ivan, and talk about how the AKP has made joining the EU part of its platform. So, how does the inclusion into the EU play into the secularist's opposition?

So, it has instituted a number of democratic changes in its constitution. It's tried to improve relations and rights for ethnic minorities, for religious minorities, and that process unfortunately has slowed down quite a bit, not only because of problems in Turkey, but also the Europeans - many of them are pretty opposed to having a large, predominately Muslim country join their Union.

STEWART: And the United States should obviously be concerned with what's going on in Turkey because of our access to Iraq, and that giant airbase that is in Turkey, frankly.

WATSON: Yeah, there is that big airbase. There's the fact that Turkey is an ally and NATO ally, and it can be very helpful with Iraq. But you know, there's a bigger question here and that is that in this Middle East that has increasingly gotten violent, that's mired in conflict, Turkey has been a pretty fascinating example of a country that has been relatively peacefully going through democratic reform, and change, and progress, and opening up to the outside world.

When I travel around the Islamic world, people look at Turkey. They're interested in what's happening here. If you see this party thrown out office, if you see the government torn down while they were basically, many would argue, playing by the rules, it sets a pretty bad precedent for the rest of the Muslim world.

STEWART: NPR's Ivan Watson joining us from Turkey. Hey, Ivan. Thank you for unpacking that story for us.