The second report in a six-part series 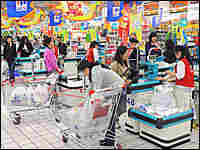 Chinese shoppers stand at the check-out counters inside a Carrefour supermarket in Shanghai on April 15, 2008. As China's population and national wealth grow, food costs — and inflation — have been rising. Mark Ralston/AFP/Getty Images hide caption 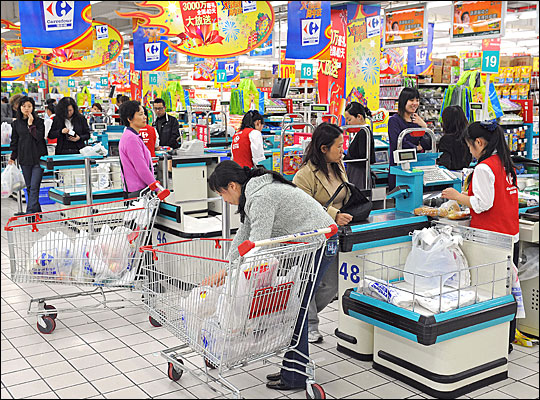 Chinese shoppers stand at the check-out counters inside a Carrefour supermarket in Shanghai on April 15, 2008. As China's population and national wealth grow, food costs — and inflation — have been rising.

Follow the hosts and producers of 'All Things Considered' as they prepare a special series on China. 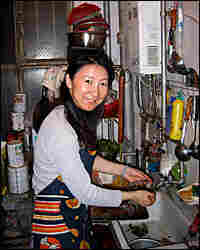 A key factor in soaring food prices is growing demand, not just from increasing population but also because people in big developing countries like China are becoming richer and can afford more food.

Even though the nation's eating habits are changing, and even though there are now 1.3 billion mouths to feed, this old Chinese saying still holds true: "To the common people, food is as important as heaven."

It's feeding time for the big, pink pigs in farmer Zhu Shangzun's pen. With 200 hogs, he's one of the biggest pig farmers in his village on the outskirts of Beijing. Most of China's pigs are bred on small, family-owned farms like his.

Zhu says prices for his pigs have more than doubled in the past couple of years, and he's clearing $70 in profit for each of the 30 pigs he sells every month.

"I doubt prices will rise further," he says. "This is the most profitable time for us pig farmers, but I think this is as far as it's going to go."

Pork is the main meat for most Chinese. In 2006, China produced more than 50 million tons of pork, accounting for more than half of the world's total — and it consumes most of that itself.

Rising pork prices have been a major factor in inflation, which reached nearly 5 percent last year, a level not seen here in more than a decade. One reason for the rising prices is a recent outbreak of blue ear disease, which decimated the hog population. But farmer Zhu cites another reason.

"It's because of the fuel issue," Zhu says. "They make corn into ethanol, and it's cheaper than oil. But that drives up the price of the corn in our pig feed."

China's leaders are worried about the political fallout from inflation, because inflation has historically been a factor in social unrest. In a bid to halt rising food prices, the government has limited the use of corn for making ethanol and introduced agricultural subsidies. Zhu gets subsidies worth about $14 for each pig.

But Zhu's profits translate into grocery sticker shock for consumers like Li Shujuan.

Li is a publishing house editor. She's making her daily trip to the market to buy meat and vegetables for dinner. She looks at the frozen pork ribs, which are selling for about $2 a pound.

There are a lot of foods that weren't available here 10 or 20 years ago, and all of them command higher prices. There is a lot more lean meat. There are convenience foods, like frozen dumplings and instant noodles. Li remembers when she was a child, she used to fight with her family members over who got the chicken drumsticks.

"At that time, I thought, 'Wow, if the chicken had more legs, everyone can have one.' But now, you can see, the chicken is divided into different parts, so people can choose whatever they want."

Li goes home to prepare dinner. She knows that many poor people in China are being hit hard by inflation. They already spend most of their income on food, and now they have to cut back on their meat intake. She says that's not an option for her family.

"You have to spend more money, because you have to live in this way," she says. "We cannot say, 'OK, the price of pork rises and we won't eat it,' because that's impossible, because we need that for daily life. So the only thing is we have to make more money to cover the expense. That's why we work hard and we come back home late."

Foreign media often cite China's increasing consumption as a reason for higher global food prices. Nicholas Lardy, an economist with the Peterson Institute of International Economics in Washington, says that so far the statistics don't bear this out.

"When you look at the trade data, China is a small exporter of food, but they're mostly exporting high value-added products, vegetables and other things like that," Lardy says. "They are importing huge quantities of soybeans, but they're not importing a lot of other grains, like rice and wheat. And they don't transmit much of their higher prices for pork to the rest of the world."

China's leaders bristle at the suggestion that their country is exporting its inflation overseas or that feeding China will ever become the world's problem. But it is clear that as Chinese people become more affluent, they will want more meats and more grains to feed their livestock, so demand has nowhere to go but up.

The first report in a six-part series 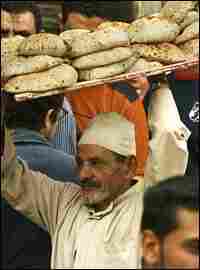 A vendor carries a rack of bread in the Nile Delta city of Mahalla, Egypt, north of Cairo, on April 6, 2008. The country is in the grip of a serious bread crisis brought on by the rising cost of wheat. Cris Bouroncle/AFP/Getty Images hide caption 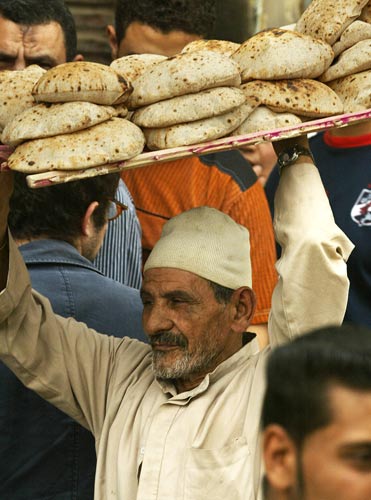 A vendor carries a rack of bread in the Nile Delta city of Mahalla, Egypt, north of Cairo, on April 6, 2008. The country is in the grip of a serious bread crisis brought on by the rising cost of wheat.

Global leaders are struggling with what may be cast as a moral issue — a worldwide increase in the cost of food. The high prices have set off protests from Haiti to Egypt. Poor people are spending even more of their income just to stay fed, if they can afford to pay at all.

There is no sign of a quick solution, but U.S. and international aid officials are trying to cope.

Josette Sheeran, the World Food Program's executive director, has spent much of her first year on the job talking about the perfect storm in the world food market — low food reserves, rising energy prices, and a high demand for biofuels.

'The Canary in the Cave'

"I think in a way we're the canary in the cave because very early on we begin to see vulnerability coming that is affecting people that make less than a dollar a day," she says. "So about a year ago, I began to talk about the perfect storm forming for the world's most vulnerable. I thought it would take a couple of years, but I think we are in the eye of the storm now."

The price of rice is up about 70 percent since last year and the price of wheat has more than doubled. Sheeran says the World Food Program just can't buy enough food.

"So now our cup in school for kids can be filled 40 percent less than it could in just eight, nine, 10 months ago," she says.

Earlier this year, she appealed for an extra $500 million but now says she needs $700 million.

"The United States usually gives between 40 and 50 percent of the world food donations and we would anticipate that we would be in that range again," Fore says. "But the prices are skyrocketing for all of us."

Fore sent a $350 million supplemental budget request to Congress before the food prices shot up.

"We've also asked for local purchase authority, which would allow our United States dollars to stretch further," she says. "When we can purchase on local markets, it also encourages local farmers to produce food. It allows the food to get their more quickly."

Experts project that prices will remain high for several years. Some countries are responding by capping food prices or limiting exports to keep enough food for their own people. Siwa Msangi of the International Food Policy Research Institute says he's worried these actions will distort the market. He says it's time for rich and poor nations to have a real discussion about how to fix all this.

Water and population policies should also be on the table — according to Lester Brown, author of the book Plan B 3.0: Mobilizing to Save Civilization.

"My principle concern about this is the effect it will have on social unrest and political stability in the low- and middle-income countries in the world that import a substantial share of their grain supply," Brown says. "These countries are in trouble now."

Unlike previous spikes in food prices, caused by crop failures, Brown says the world is dealing with systemic changes now — rising demand in Asia, for instance, for more grain-intensive livestock. But he says the straw that broke the camel's back is the demand for biofuel.

"The grain required to fill a 25-gallon SUV tank with ethanol will feed one person for a year," Brown says. "And what we are seeing now is the emergence of direct competition between the 860 million people in the world who own automobiles and who want to maintain their mobility while the 2 billion poorest people in the world simply want to survive."

Brown says he's starting to hear a debate once again about the predictions by 18th century demographer Thomas Malthus — that the world's population will outgrow its food supply. But U.S. officials brush off such talk.

"I have not yet met an expert who doesn't believe the world can produce more food," she says. "And so, I am a long-term optimist — i.e., over the next 5 or 10 years, we will figure this out."

In the meantime, her organization is scrambling to help those hardest hit by the price hikes.