Accessibility links
'Bad Money' Criticizes Wall Street, U.S. Finances Steve Inskeep talks to author Kevin Phillips about his new book, Bad Money. Phillips argues in the book that the U.S. economy is in danger because of its reliance on the financial industry. He also believes that Wall Street has steered the nation toward greater debt.

Steve Inskeep talks to author Kevin Phillips about his new book, Bad Money. Phillips argues in the book that the U.S. economy is in danger because of its reliance on the financial industry. He also believes that Wall Street has steered the nation toward greater debt.

As nervous as you may be about the trouble in the U.S. economy, Kevin Phillips thinks you may not be nervous enough. Phillips is a former Republican strategist and former commentator on this program. In more recent years, he has sounded serious warnings about his country's politics, its economy, and its future.

In a new book called Bad Money, Phillips argues there is a reason the credit crisis spreads through the whole economy. he says it's because the credit industry almost is the economy.

How has Wall Street steered us as a country toward greater and greater debt of many different kinds?

Mr. KEVIN PHILLIPS (Author, Bad Money): You've had a massive upheaval in the United States in the last two decades, in which financial services - the financial sector includes finance, insurance and real estate - has dwarfed manufacturing, which has slipped way down, and become the leading part of the economy in terms of share of gross domestic product. This sector ballooned. It increased hugely in size. One of its biggest products is actually debt and credit - credit cards and debt obligations. All right.

Mr. PHILLIPS: You've got an economy that runs basically on money being moved around, and we now have convenience fees on ATMs, all kinds of things like this. It doesn't make much anymore in terms of products, and as a result we have to import huge amounts of manufactured goods and oil. And it costs just buckets and buckets of money. And we can't afford that, so we're an international debtor, too. It creates a special vulnerability.

We have taken this sector which is speculative, unstable, given to all kinds of practices that haven't been regulated much for the last 20 years, and then put it in charge of the U.S. economy. That is not a smart idea.

Mr. PHILLIPS: Well, if you look back at the leading world economic powers, the Dutch and then the British stopped doing what they were doing so well for so long - industry, maritime commerce - and in their last decades they've become more and more dependent on finance, on providing services to the world, banking, maritime insurance, all of these sorts of things. And they thought that would work. That that was a new form of success. And that was the next stage of a great economy.

It wasn't. It was the stage in which they were starting to lose what had been built up by the solid things: industry and physical commerce and agriculture and maritime industries. If we look at what happened to them, it's confirming the dangers of letting yourself get into this posture of thinking that you can provide services and finance to the world and that works. It never has.

INSKEEP: Well, is there a reason that you choose to include this quote in your book, which goes even further back in history, for an analogy. If we are Rome, Wall Street's our Coliseum.

Mr. PHILLIPS: I thought that was a very good observation by a commentator on Market Watch. He used that slogan. And I think it's true in the sense that it's a global arena, Coliseum or not. But finance is where these things are being fought out. It's where we're losing these battles. The dollar is like a gladiator bleeding on the field of the Coliseum.

The things that we used to produce that we don't produce anymore are just shooting up in their cost to us. We're importing inflation as the price of oil rises because people buy it as a substitute for investing in the dollar. The Coliseum is telling us huge trouble.

But the Coliseum doesn't make it onto the evening news. the Coliseum just becomes little things about the Dow Jones Industrial Average. That it was a bad day on the market. And no sense that this is a nation's fate being adjudicated.

INSKEEP: When you try to take the longer view do you think it's already too late?

Mr. PHILLIPS: Well, it's not too late in one very important sense. These countries that have had these problems historically have gone through periods of 20, 30, 40 years when adjusting to their new lesser role has caused lots of problems. They've had to make major adjustments. They couldn't live nearly so high on the hog. The British even had food rationing for almost 10 years after World War II.

But when you make the adjustments, and you come out, you're strong again. and obviously is Britain is prosperous now. So for the United States, the important thing is to think about the next stage after we go through the crisis and we build a better foundation and we stop thinking that we can be the policeman of the world, the banker of the world, the great advice giver of the world, etcetera, etcetera.

That doesn't work. But there is a future for the United States, as there has been for all these others, when things change and the new framework is built.

INSKEEP: Now, wait a minute. There was what was famously called the American century. A century dominated by the United States. Are you saying there's not going to be another, but we can at least hope for a pretty decent place in the Chinese century or whatever it's going to be?

INSKEEP: Kevin Phillips is a former Republican strategist, now the other of many books, the latest of which is called Bad Money. 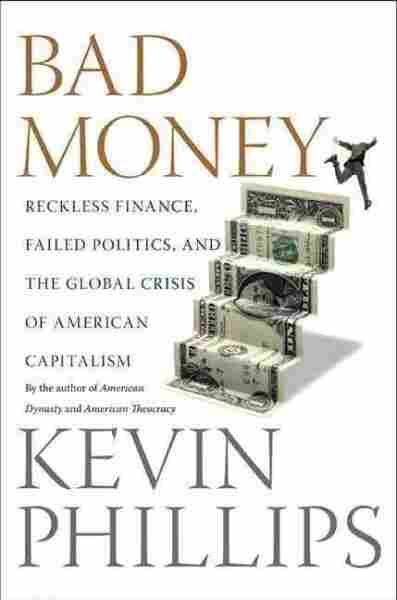