Accessibility links
Taiwan Takes Fast Track to Universal Health Care About 10 years ago, Taiwan created a national health care system from scratch by adopting good ideas from other countries. Patients say they're satisfied and never go into debt for medical care. The government, however, is borrowing to finance the system. 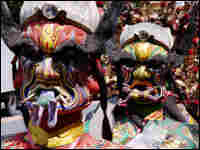 A celebration of the 1028th birthday of the Taoist god of health in Taipei, Taiwan. Sam Yeh/AFP/Getty Images hide caption 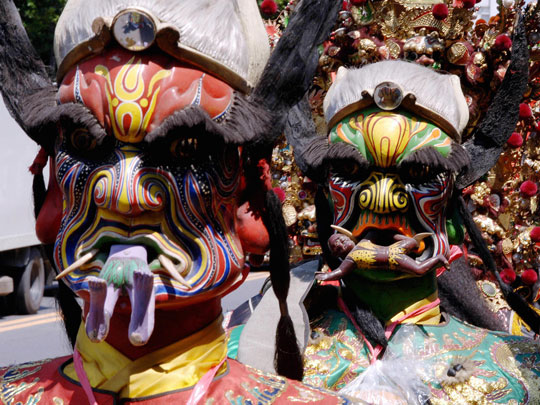 A celebration of the 1028th birthday of the Taoist god of health in Taipei, Taiwan.

At the end of the 20th century, Taiwan became a rich country, almost overnight. But it still had a poor country's health care — about half the population had no coverage at all. So Taiwan set out to design a national health care system from scratch. What makes Taiwan unique is the way the country figured out how to cover everyone.

Hongjen Chang was one of the officials in charge back then. Walking through Taipei's imposing Chiang Kai-shek Memorial Park, he recalls how they did it.

"Taiwan is a small island," he says. "We always look abroad internationally for ideas."

Chang quotes a Chinese saying: "'The track of the previous cart is the teacher of the following cart.'"

In other words, if someone else's oxcart has found a good route to universal health coverage, follow those tracks. "If they were trapped in trouble, avoid that track. Find a new track," Chang says.

The government consulted experts from around the world, like Taiwanese American health economist Tsung-mei Cheng.

"In the end, the program that they finally set up in 1995 really is like a car that was made of different parts, imported from overseas, but manufactured domestically," Cheng says.

They wanted a system that gave everybody equal access to health care — free choice of doctors, with no waiting time — and a system that encouraged a lot of competition among medical providers.

To finance the scheme they chose a national insurance system: a single, government-run fund that forces everybody to join in and pay.

The result is a system that works a lot like Canada's, or like the U.S. Medicare system, but with more benefits.

To satisfy the patients in Taiwan, there's no gatekeeper who controls access to specialists and no waiting lines.

If you woke up in Taiwan with shoulder pain, for example, Chang says that you would be able to see an orthopedic specialist the same morning, no recommendation from a general practitioner required.

"Our people don't like the idea of gatekeepers. They want to decide by themselves," Chang says.

By consolidating so much — one government plan that covers everybody — Taiwan achieves remarkable efficiency.

Everybody here has to have a smart card to go to the doctor. The doctor puts it in a reader and the patient's history and medications all show up on the screen. The bill goes directly to the government insurance office and is paid automatically.

So Taiwan has the lowest administrative costs in world: less than 2 percent.

They also use that smart card to track patterns of use.

"If a patient goes to see a doctor or hospital over 20 times a month, or 50 times in a three-month period, then the IT picks that person out. The person then gets a visit from the government, the Bureau of National Health Insurance, and they have a little chat. And this works very well," Cheng says.

That may be too much like Big Brother for some people in the United States, but surveys show the Taiwanese are highly satisfied with their health care.

Plus, no one goes bankrupt because of medical bills, Chang says.

So the patients are safe from bankruptcy. But the system itself is under strain. Chang says that Taiwan spends 6.23 percent of its GDP on health care, compared to 16 percent in America.

So the United States spends too much on health care, and doesn't even cover everybody. But the Taiwanese don't bring in enough money to pay for all the services they offer.

"So actually, as we speak, the government is borrowing from banks to pay what there isn't enough to pay the providers," Cheng says.

Taiwan's politicians are reluctant to increase premiums: they're afraid the voters will punish them.

So that's the problem here. And frankly, the solution is fairly obvious: increase the spending a little, to maybe 8 percent of GDP.

Of course, if Taiwan did that, it would still be spending less than half of what America spends.

Frontline: Sick Around the World