Accessibility links
Katie Couric, CBS and the Future of Network News Katie Couric's early exit from CBS News appears almost imminent, but her departure signals more than a personal failure to win ratings; it's the unraveling of the idea of a "big three" in network news.

Listen
Katie Couric, CBS and the Future of Network News 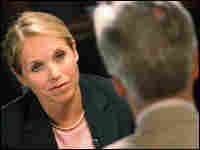 CBS Evening News anchorwoman Katie Couric isn't quite halfway through her five-year, $75 million contract with the network, but now she is considering how to leave the third-rated newscast early.

After the fiasco of Dan Rather's report on President Bush's military service record, CBS could have tried to hold on to the largest share of the dwindling audience for the three network nightly newscasts.

Instead, as CBS executives saw it, they gambled big, hiring Couric away from NBC's morning Today Show to remake the network evening newscast for a new and younger audience.

"The goal Katie had coming in — and I know because she and I talked about it at great length — was not to make the evening news somehow light and fluffy," says Rome Hartman, her first executive producer on the show. "The idea was to make it more accessible to more people — but to do more in-depth work, frankly."

Under Couric, the show tried and dropped all kinds of experimental segments, but the ratings plummeted. CBS Evening News is now down to fewer than 6 million viewers a night, while newscasts at NBC Nightly News and ABC World News each exceed 8 million viewers. Hartman was ultimately forced out.

"That evening news program has not performed on a commercial level anywhere near what I had hoped and she had hoped and the company had hoped and [CBS News president] Sean McManus had hoped," says Hartman, now executive producer of the nightly TV newscast BBC World News America. "I mean, that's obvious."

It has been painful, too. Couric met earlier this year with network officials to explore how her departure would be handled. She told one confidante a few weeks ago that "they lied to me," saying CBS had promised to hire new top-flight on-air correspondents and producers. According to this associate, Couric said she wanted out of the job.

The revelation has caused tumult within CBS and speculation outside. CBS officials said they strongly support the show and its anchorwoman, and issued this statement:

"There are no plans for changes relative to Katie Couric or the CBS Evening News. The evening news broadcasts are the flagships of every network news division and no one is planning to phase them out, including CBS."

Aside from the Evening News and the ratings-impoverished CBS Early Show, news programs have done well. The Sunday night primetime magazine 60 Minutes remains a towering and profitable force. And the CBS Evening News may well endure for the short term and even in years to come, with Couric or without her. But some of her colleagues say they don't know for how long.

"It's demoralizing in a tremendous, tremendous way," says Socolow, who was executive producer for the CBS Evening News when Walter Cronkite was the anchor.

Covering all three presidential candidates and reporting from Iraq costs millions of dollars a year. And that's happening as CBS's poor ratings are forcing the network to return money to some advertisers. At the same time that Couric is being paid $15 million a year, the network is cutting back the news division. To save money, CBS hopes to strike a partnership with CNN, though recent talks about collaboration in Baghdad broke down.

But even in its damaged state, the CBS Evening News pulls in far more viewers than cable newscasts.

"Nobody should be writing the obituary for CBS News, because there's too much good still going on there, and there are too many good people determined to make it work," Hartman says. "It's a tough time — but it's not over by any stretch."