Accessibility links
A Seder with a Syrian Flavor Move over gefilte fish and matzo-meal cakes. In the exotic, fragrant and flavorful cuisine of the Ashkenazic Jews of Aleppo, Bonny Wolf has found enticing options for her traditional Seder menu this Passover. She shares some of her favorites.

Hear an interview with Poopa Dwek, author of "Aromas of Aleppo"

A Seder with a Syrian Flavor

A Seder with a Syrian Flavor

Hear an interview with Poopa Dwek, author of "Aromas of Aleppo" 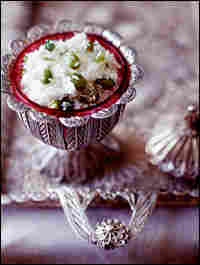 Helou Hindi (Candied Coconut with Pistachios) is a sweet finish to a Passover Seder made up of traditional dishes of the Jews of Aleppo, a town in northwestern Syria. Quentin Bacon/From "Aromas of Aleppo" hide caption 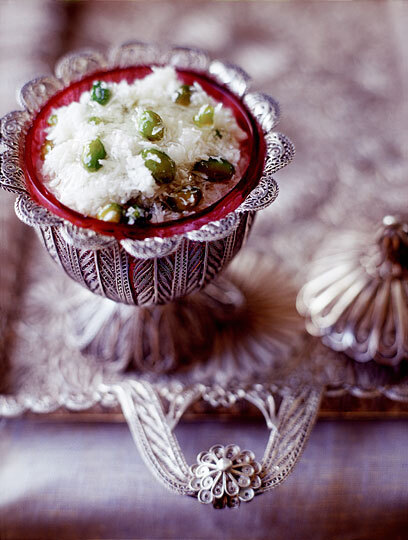 Helou Hindi (Candied Coconut with Pistachios) is a sweet finish to a Passover Seder made up of traditional dishes of the Jews of Aleppo, a town in northwestern Syria.

When my mother was a child in the 1920s, her great aunts once held a formal Passover Seder. The women wore long gowns and the men tuxedos. Celebrating the Jews' liberation from slavery in Egypt, they felt, was worth getting dressed up for.

Of all Jewish holidays, Passover includes the most formal, multi-course meal. Tables are set with the best linens, the china is taken out of quilted storage cases and the silver is polished. Fresh flowers make the table look like a spring garden.

I've always loved the Seder table but found the food lackluster. Let's be honest, gefilte fish is homely, even with its dashing side of beet-enhanced horseradish. And cakes made with matzo meal never look or taste like the real thing.

Then I discovered the Jews of Aleppo. And in their exotic, fragrant and flavorful cuisine, I found enticing options for my traditional Seder menu.

Like most American Jews, I come from an Ashkenazic background. That means my relatives came from Eastern Europe.

Sephardic Jews are from countries, such as Syria, along the Mediterranean Sea. That means they have better food. Middle Eastern meals begin with chickpea hummus and eggplant baba ghanoush. Meat and vegetable dishes are accented by dried fruits, nuts and fragrant spices. Vegetables are stuffed with rice, and desserts are sprinkled with orange blossom water.

The first Jews settled in the northwestern Syrian town of Aleppo around 586 B.C. After years of conflict between Jews and their Arab neighbors, the last Jews left Aleppo in 1997. The Jews of Aleppo largely moved to Israel, South America and the United States. And they brought their food and culture with them.

None of the recipes, however, were written down. They existed only in the minds and the hands of the older women.

About 30 years ago, Poopa Dweck got worried. A first-generation Jewish Syrian-American, she wanted to be sure the traditional foods were not lost with the cooks who knew how to prepare them. So she and other women in her community in Deal, N.J., began talking to older cooks and writing up their recipes.

Last year, these community recipes were rewritten and compiled in a large, coffee-table cookbook full of color photographs and the history of the Jews of Aleppo, Aromas of Aleppo: The Legendary Cuisine of Syrian Jews, written by Dweck and Michael J. Cohen.

Dweck says Syrian food differs in some ways from other Middle Eastern cuisines. The use of tamarind, for example, is uncommon in cooking of other countries in the region. Dweck says tamarind was introduced to Aleppo from India via Persia in the seventh or eighth century and has remained integral to the cuisine. Tamarind pods hold a sweet-sour pulp used to season food.

Also unusual are the small bitter cherries, abundant near Aleppo, featured in a number of dishes. One recipe is for a stew of meatballs with allspice and pine nuts smothered in a sauce of cherries, onions and tamarind.

Dweck says the food of Aleppo also is known for its liberal use of spices. Allspice, cinnamon, saffron and cardamom are common ingredients.

There are, however, some strict dietary laws for Passover that limit options. The rules prohibit anything made from wheat, rye, barley, oats and spelt, reminding us that in their haste to leave Egypt, the Jews did not have time to let their bread rise.

One of the major Passover dietary differences between Sephardic and Ashkenazic Jews, however, is the question of rice. The Ashkenazi, making a different interpretation of Jewish law, do not eat rice on Passover. The Syrians do.

Ashkenazi Seders usually include chicken matzo ball soup, gefilte fish, a roast meat, green vegetable and cake made with matzo meal — or some variation thereof. Color and spice are rarely in attendance.

It's a Seder menu worthy of my great aunts' damask cloths. 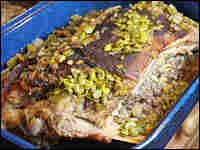 This is one of the more elaborate dishes in Aleppian Jewish cooking. It looks very dramatic but is actually quite easy to put together. In this recipe, adapted from Aromas of Aleppo by Poopa Dweck (Ecco 2007), allspice-scented hashu, the common Aleppian ground meat and rice filling, is stuffed into a breast of veal that is slow roasted until very tender. Fresh fava beans are usually available around Passover and are often added to this dish. Ask your butcher to form a pocket in the veal breast. Veal breast has a fairly high fat-to-meat ratio so it is quite rich. A little goes a long way.

6 to 7 pounds veal breast, bone in, with pocket

2 pounds shelled fava beans (may substitute shelled green peas, whole mushrooms or artichoke hearts — all may be fresh or frozen)

Loosely stuff the veal breast with the hashu. Set breast aside on a tray.

Combine the allspice, salt, garlic and pepper. Rub 1 tablespoon of the oil all over the veal breast. Generously apply allspice mixture to the meat.

In a large roaster, saute the onion and celery in the remaining 2 tablespoons oil for 3 minutes, or until soft. Transfer to a small mixing bowl.

Sear the veal in the same roaster over medium-high heat or until lightly browned, turning once, about 5 minutes. Add the onion-celery mixture to the pan along with 1 cup water. Cover and roast for 1 hour, basting occasionally.

Remove from oven and add fava beans (or other vegetables) to roaster. Season with additional allspice, salt and pepper, if desired. Reduce temperature to 300 degrees. Add another 1/2 cup water if pan dries out and return to oven. Roast for another 1 1/2 to 2 hours.

When the Jewish community still lived in Aleppo, hashu was mostly rice since meat was expensive. For fancy dinners (such as the Seder), pine nuts are added. This recipe is adapted from Aromas of Aleppo.

Soak rice in water, enough to cover, for 30 minutes. Drain. 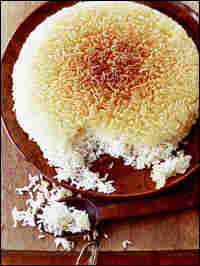 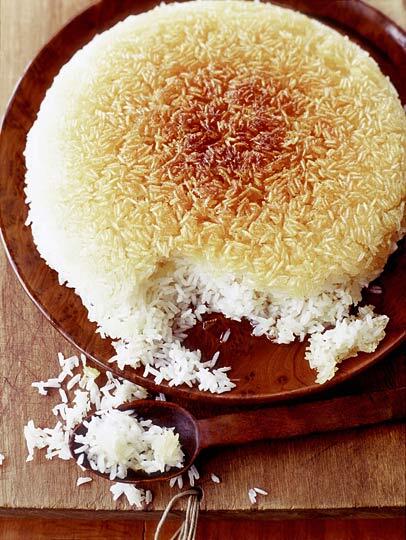 This recipe is similar to Persian rice with the golden, crunchy crust that sticks to the bottom of the pot. This crust is called tadiq by the Persians and a'hata by the Aleppians. However, Persian rice uses butter while the Jewish Aleppian style substitutes oil to meet Jewish dietary restrictions.

In a medium saucepan, bring water and salt to a boil. Add rice and boil 10 minutes. Drain rice in colander and rinse in warm water.

In a 2- to 3-quart saucepan, heat the oil for about 30 seconds, then add the rice. Cover the pan with a kitchen towel, and then a heavy lid over that. Cook rice over medium-low heat for 30 to 35 minutes, until fluffy and a crust has formed on the bottom.

Dip the bottom of the saucepan in a large bowl of ice water for 30 seconds. Turn upside down on platter and golden rice crust will be on top.

This is the Aleppian Jews' sweet of choice for Passover. Freshly grated coconut meat is best but somewhat labor intensive. (Break open a coconut with a hammer, drain out the liquid, and pry out the meat with a dinner knife. Peel off the thin, brown skin with a sharp knife. Grate the meat.) If you opt for store-bought coconut, be sure it is unsweetened. This recipe is adapted from Aromas of Aleppo.

In a medium saucepan, combine all ingredients but pistachios. Bring to boil over medium-high heat. Reduce heat to low and simmer for 8 to 10 minutes, stirring the mixture occasionally with a wooden spoon.

While the mixture is still hot, stir in the pistachios. Mix well and cool before serving.

*If using store-bought coconut, place in a mixing bowl and cover with cold water. Gently fluff the coconut with your hands and let stand for 1 hour to plump and moisten the flakes. Drain before using.

**Orange blossom water is available at Middle Eastern markets and some specialty stores.

***Shelled pistachios are available at some specialty stores.