Accessibility links
Chinese Family Takes Carbon Challenge With a car, a country villa and frequent travel, the Shengs, a family of three, readily admit they emit more carbon dioxide than the average Chinese family. But how does their "carbon footprint" stack up against an American family's?

Sheng Jingjiang and his wife, Wang Xianrong (right), live in Beijing with their 27-year-old daughter, Sheng Jiali. They readily admit that they emit more carbon dioxide than in years past as their standard of living has risen. Andrea Hsu, NPR hide caption 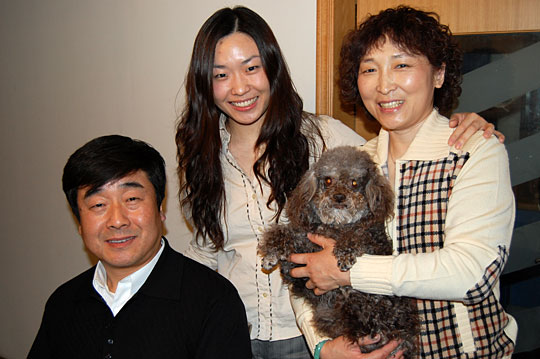 Sheng Jingjiang and his wife, Wang Xianrong (right), live in Beijing with their 27-year-old daughter, Sheng Jiali. They readily admit that they emit more carbon dioxide than in years past as their standard of living has risen.

The Sheng family does not have an oven. They use two gas burners to cook, which lowers their carbon dioxide emissions. Andrea Hsu, NPR hide caption 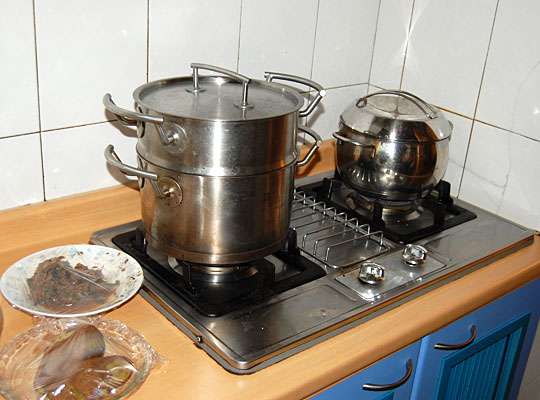 The Sheng family does not have an oven. They use two gas burners to cook, which lowers their carbon dioxide emissions.

The Sheng family, an upper-middle-income family of three in Beijing, is enjoying a comfortable lifestyle in the booming Chinese economy. They have a car and a villa in the country, and they fly to Chengdu two to three times a year.

The family's energy consumption, as a consequence, has risen since they bought a second home and amenities for their apartment.

Sheng Jingjiang, Wang Xianrong and their 27-year-old daughter, Sheng Jiali, who goes by the English name Scarlett, are aware that their comfortable lifestyle means they're emitting more carbon dioxide into the atmosphere than the average Chinese family.

But the family is still conscientious about their "carbon footprint."

The family agreed to have their carbon emissions tabulated to see how they stack up against a North Carolina family who were evaluated a year ago.

The Shengs live in a modern, three-bedroom apartment in central Beijing. It has white walls, tile floors, a huge flat-screen television and a black leather massage chair in the middle of the living room.

The galley-style kitchen, at 8 feet long by 6 feet wide, is average for a Chinese home, but cozy by U.S. standards. The refrigerator is much smaller than the average American model and there is no oven — just two gas burners for cooking.

The family's washing machine is in one of their two bathrooms, but there is no separate dryer. They hang their clothes on one of their enclosed balconies.

They recycle bottles, cans, magazines and newspapers and use energy-saving light bulbs.

Still, father Sheng Jingjiang is the first to admit that theirs is not a particularly frugal household when it comes to energy use.

"We've been living here for nine years," he says. "On average, our electricity use comes to about 100 kilowatts per hour per month."

He says they use less electricity in the winter than in the summer, when they run the air conditioner.

"For cooking, we use natural gas," he says. "That comes to about 30 cubic meters [of gas] every month."

Sheng Jingjiang estimates the family has used about 1,000 cubic meters of natural gas over the past six months. Some of that is for cooking, but it's mostly for heating the second home during the winter. The heat for the apartment is provided by the building, so they don't know how much they use.

The family has one car: a Honda. Sheng Jingjiang jokes that since Wang Xianrong retired last year, she is the family's driver and shuttles him and their daughter to work.

The family also travels frequently. Sheng Jingjiang travels for work a few times a year. All three fly to Chengdu, where Wang Xianrong is originally from, two or three times a year. And on most weekends, they drive to their villa in the country, running up their monthly gasoline tab.

"There used to be a farm out there," Sheng Jingjiang says. "The air is better. There are more trees. It's much greener."

A second home, a symbol of China's growing wealth, is becoming more common for Chinese families, especially for those who live in heavily congested cities.

Added all up, the Sheng family produces slightly more than 15 metric tons of carbon dioxide a year. That does not include the natural gas used to heat their downtown apartment, since they don't see the numbers for that. But it does take into account the fact that China gets most of its power from burning coal.

Emissions-wise, the Shengs stack up pretty well against the Sheppards, a couple from North Carolina with two young children who took the carbon challenge last May. The Sheppards produce about 14 metric tons of carbon dioxide a year enough to fill about nine hot-air balloons. Their emissions were about 40 percent lower than the average North Carolina family until they added in their air travel. With air travel, the Sheppards account for nearly 27 metric tons of carbon emissions per year.

The Sheng family's carbon emissions numbers reflect the growth in China's economy over the past few decades.

Sheng Jingjiang says his parents knew how to conserve, but they did it because they were poor.

"When I was young, Beijing winters were cold, very cold," Sheng Jingjiang says. "Now they're much warmer. The whole world is getting warmer. Beijing is getting bigger and bigger. There are more and more tall buildings. Everything is changing."