Accessibility links
Puerto Vallarta: A Modest Taste of Real Mexico You won't find Marisma, a taqueria in Puerto Vallarta, in any guidebook. But nearly every local Vallarteno knows about the simple, side-street stand that serves up some of the city's best fish tacos. 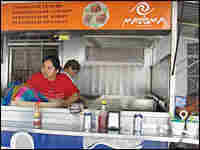 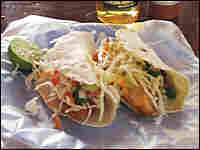 Although Marisma serves an array of dishes, the fish tacos are the main attraction. Loren Jenkins, NPR hide caption

Like any tourist mecca south of the border, Puerto Vallarta has its share of good — and expensive — restaurants. There is the swank Cafe des Artistes for one, the new and artsy Azul or venerable establishments like the Cafe Maximilian.

But my favorite is the cheapest and most modest of eateries — a street-side taqueria called Marisma. It isn't a place casual visitors to this Mexican resort town on the Pacific are likely to be directed to by their hotel concierge, and it isn't in any of the guide books.

But nearly every local Vallarteno knows about it — and frequents it. And any visitor to Puerto Vallarta — the city made famous as the setting for Elizabeth Taylor's headline-making love affair with the late Richard Burton in the 1970s during the filming of The Night of the Iguana — would be remiss to miss it.

Marisma isn't on the tourist path of the malecon boardwalk along the hotel- and restaurant-dotted beach in the heart of the old town. But it is only an eight-block walk away.

As the shops selling beachwear and Mexican handcrafts recede, one comes to the quiet little cobble-stoned Calle Naranjo. There isn't much there: a row of small townhouses, a white-washed wall of a long-closed nightclub, a couple of large trees. In their broad shade sits an aluminum-sided stand, flanked by six rough stools, and a dozen other small chairs and tables on the sidewalk.

There, Marisma herself and her three assistants work tirelessly around a simple steel grill. One assaults a soccer-ball-sized round of dough to make tortillas; another fries fresh dorado fish and shrimp on a simple grill. The third serves up fruit drinks and sodas and mans the cash box.

Marisma's fish tacos are special. They are as basic as they are fresh: a tortilla just off the grill, a fillet of fried fish, some shredded lettuce and four varieties of chili sauce and salsa — red and green — to spice them according to personal heat quotients and tolerance.

Marisma doesn't have a liquor license, so there is no beer to wash the tacos down with — just Cokes and some local juices. But there is a small grocery shop at the corner with a giant fridge full of icy Coronas and Pacificas, so beer is available just steps away.

There are other Mexican grill dishes, of course: quesadillas of shrimp and marlin, spicy squid and crab and, of course, a tostada of ceviche, a scrumptious raw fish salad. All are excellent.

But the fish taco, so simple and fresh, is the main attraction. Eat one or two of those, and you quickly realize what real Mexican food is all about.

Sitting in the shade on the sidewalk, munching a taco while pulling on an ice-cold Corona, you see the real Mexico that ordinary tourists clogging the beach just blocks away never see. Old crones hobble up to the stand from their neighboring homes; other women arrive by taxi for their daily fare. Schoolchildren with backpacks stop by for a quick bite on their way home. The odd travelers with rolling suitcases grab a quick lunch before taking a bus to their villages.

Some just have a taco or two and move on. Others sit cramped under the trees, talking with friends as order after order is brought to their tables. This is great food — and cheap. A lunch for six cost all of $20. That is, of course, without the beers bought across the street. With beers, six can eat for $26.