Accessibility links
Balancing Biofuel, Food Crops a Challenge for Britain Britain has been forced to seek a compromise between finding greener ways to fuel its economy and growing food to feed its population. A new law went into effect there Tuesday that requires 2.5 percent of all gasoline and diesel sold for any vehicle to come from biofuels.

The third report in a six-part series 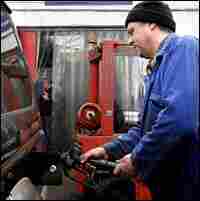 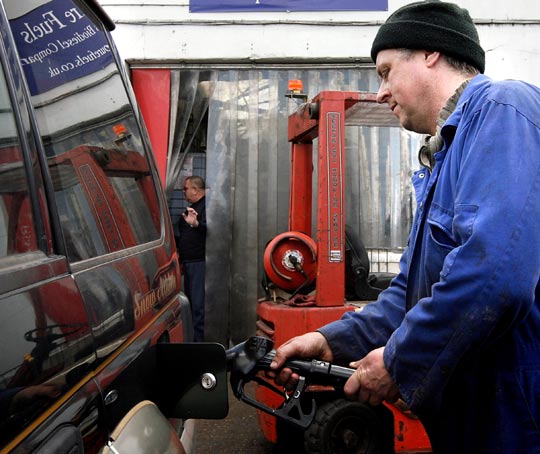 Biofuel producer Tom Lasica fills a car in London with biodiesel made from vegetable oil waste from local catering companies, restaurants and pubs.

A new law went into effect in Britain on Tuesday that requires 2.5 percent of all gasoline and diesel sold for any vehicle to come from biofuels. That will rise to 5 percent by 2010, and the European Union has proposed a target of 10 percent across Europe by 2020. While those targets initially were criticized as a timid response to global warming, now there is some relief that the policies haven't gone further.

The Rising Cost of Bread

The global food crisis has started to affect Bonnet's Bakery in the tiny town of Chatteris, just north of Cambridge in eastern England. Standing behind the counter serving wholesome whole-grain loaves is Valerie Shay.

The customers trickling into the bakery seem philosophical about the extra 40 or 50 cents on the cost of a loaf of bread. Perhaps that's because, unlike most of the developing world, where up to 80 percent of income can be spent on food, in Britain and much of Europe, that figure is more like 10 percent to 15 percent. Europeans grumble a little, tighten their belts, cut down on luxuries and get on with it.

But there's no grumbling at all, for once, from one group of Europeans.

A Boost for Farmers

George Munns, 47, climbs aboard his big green tractor on the 500 acres he farms just outside Chatteris. For decades, it has been tough for British farmers, as rock-bottom crop prices meant huge financial difficulties.

But in the past couple of years — with rising demand in China and India, and poor harvests in places such as Australia — that has all changed.

"Wheat prices three years ago were 60 pounds a ton. Now the spot price for wheat is about 170," Munns says.

That tripling of the price Munns gets for his wheat has revitalized his farm as a business. And it has meant that, while a few years ago he and neighboring farms were looking at the possibility of growing crops for biofuels, he now isn't interested.

"We won't do anything particularly to make biofuel here now, because it's just not worth it," he says.

Part of the Solution

Britain has turned much less land over to biofuels than other European countries, such as Germany. But only 2 percent of European agricultural land is used to grow such crops, compared with 20 to 30 percent in the United States.

Michael Mann, the European Union's spokesman on agriculture, contends the multinational partnership is part of the solution to the world food shortage, not part of the problem.

"We are seeing huge areas of land in countries that have recently joined the European Union coming into production that previously were left unplanted. We are also trying very hard to move to the second generation of biofuels, which don't use agricultural raw materials but use byproducts and waste products," Mann says. "... So we don't see that European Union biofuel policy will have a major effect on food prices or food availability."

John Alliston, dean of the school of agriculture at Britain's Royal Agricultural College, agrees. He says the world does need to find a replacement for burning fossil fuels, of course, but in the current dilemma, he says, Europe should stick to its strengths.

"In mainland Europe, we are good at producing food because of the climate we have and because of the rainfall we get, so that's what I think we should be doing," Alliston says. "And maybe other parts of the world that produce sugar perhaps might want to produce the energy."