Accessibility links
Rupa and the April Fishes: Multicultural Music Rupa Marya was born to Indian parents in San Francisco and raised in the U.S., India, and the South of France. Now she sings in French, Spanish, English, and Hindi while maintaining a career as a physician. 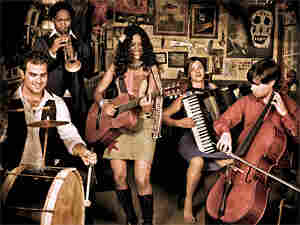 With songs in French, Spanish, English, and Hindi, the band Rupa and the April Fishes could have been formed in the food court of a suburban mall.

To the contrary, the band was founded in San Francisco by Rupa Marya, a doctor-by-day and singer-by-night born to Indian parents and raised in the U.S., India, and the South of France. Her debut album is called eXtraOrdinary rendition. She and the band join John Schaefer in the Soundcheck studios for an interview and live performance of tunes from the album.

She began with a song called "Une Americaine a Paris" — decidedly not a reference to George Gershwin's blithely upbeat An American in Paris, but rather an uncomfortable moment in a Parisian cafe that Marya had once experienced. A man had struck up a good conversation with her, but when the man, who was from Algeria, learned that Marya was American, the tone changed rapidly.

"This wall came down between us," she says. "And he said, 'Aren't you afraid to be an American in Paris with all these angry Arabs? If you were in my neighborhood...' and he just went [motions hand across throat]. ... That personal connection that we had just froze in that moment, and it was probably one of the most chilling experiences I've ever had face-to-face with a stranger."

Of course, Marya, the daughter of Indian parents, is no stranger to multiculturalism. She was born in the San Francisco Bay Area; her parents moved her back to India, then to France; and she settled again in California.

"I was raised a very confused child, and I feel like this music that I've been writing has been a way of trying to give voice to that experience, and come to understand it in a way," she says. "Because these identities — they all exist inside me."

The lion's share of songs on the album, however, is sung in French. Marya says she challenged herself after Sept. 11, 2001, to try something different.

"I was ... so horrified by the reaction of fear, of what was unfamiliar to people that I felt happening in our country," she says. "And I wanted to write songs about love — which I had never done before — and to write them in a language that people in my immediate surrounding didn't necessarily understand, but wouldn't be wholly alienating to them. And to see if people could understand the emotion and the truth that was being conveyed under the language I was speaking through the music. So it started as an exercise, an artistic exercise to use language as a musical tool, also, with rhythm and melody inherent in the words."

When she isn't on stage, Rupa Marya is a doctor of internal medicine on faculty at UCSF, and often draws ideas for songs from her patients' stories. She was able to take advantage of a flexible residency track designed for female doctors who may be expecting children, which allows her to spend six months working and the other half of the year touring.