Accessibility links
Enter New Playwrights, Stage Left, in Denver Three years ago, Kent Thompson became the artistic director of the Denver Center Theatre Company. Under his leadership, the company has become one of a handful of regional theaters around the country committed to developing new work. 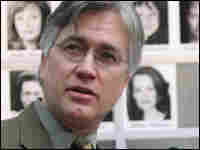 Kent Thompson traces his interest in theater back to Sunday drives with his parents. 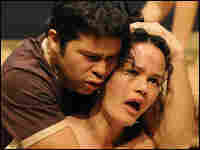 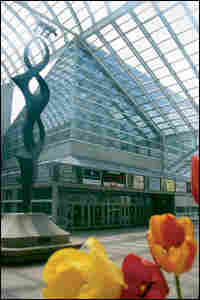 When Thompson took the position, he had two goals: to serve the local community and to develop new plays.

The first thing he did was to look at what plays the company had done before; he discovered that out of 264 productions, only a handful had been written by women.

"I thought, that's really strange because the American theater of the last 25 years has been the renaissance of writing by women," says Thompson. "I knew we needed to correct that right away, so we started doing three or four plays a year by women."

Thompson also noticed the Denver Center had done very few plays by Latinos, even though Denver's population is about one-third Hispanic. So now they're doing one Latino play a year, including Lydia, by Octavio Solis, which Thompson shepherded into creation, first commissioning it, then giving it a professional reading and finally staging a full production — an unusual level of involvement for an artistic director.

Lydia was one of three world premieres at this year's New Play Summit, a conference that Thompson started as a way to showcase readings and full productions of new work. Critics raved about the play, which tells the story of a dysfunctional Mexican-American family in El Paso, Texas. One reviewer compared playwright Solis to Eugene O'Neill and Arthur Miller; another called Lydia a story "filled with mystery and magic."

And Lydia's appeal isn't limited to the Denver area; the play has been picked up by the Marin Theater Company in California and the Yale Repertory Theater, and it's being considered by artistic directors in Seattle and West Virginia.

The success of Lydia notwithstanding, bringing a new play to the world is a tough business; the financial risk is high, and the odds that it will be a hit are low. But Thompson understands what it takes to make a new play work, says Ed Herendeen, the artistic director of the Contemporary American Theater Festival in Shepherdstown, W.Va.

"What Kent's doing is extraordinary, because so many plays get workshopped to death," says Herendeen. "They get read and read, but they hardly ever get full productions."

Thompson admits that the traditional subscription audience of any regional theater isn't always open to new plays by writers they've never heard of. But so far in Denver, ticket sales are holding steady, and, besides, Thompson thinks hiring new writers is worth the risk.

"I'm hiring [new playwrights] because I want them to reflect the soul of the times, however they see it," says Thompson. "There's a lot of potential to create something magical. And only one in 20 productions will be magical but that's what you're going to work toward."