Accessibility links
Pope Praises America at D.C. Mass Pope Benedict XVI praises America as a land of opportunity during his first public Mass in the U.S. Tens of thousands of worshippers filled the new baseball stadium in Washington, D.C., for an open-air service.

Pope Benedict XVI praises America as a land of opportunity during his first public Mass in the U.S. Tens of thousands of worshippers filled the new baseball stadium in Washington, D.C., for an open-air service.

Earlier today at a mass at National Stadium, the pope acknowledged the pain of the sexual abuse scandal. The 81-year-old pontiff also spoke of repentance and forgiveness, and called the 46,000 worshippers in attendance to a more rigorous faith.

BARBARA BRADLEY HAGERTY: With the first rays of sunlight, worshippers began streaming into the stadium. By 8:30, the line at the souvenir stand was a dozen people deep.

BRIAN OLMOS: We're out of the key chain, Sir. Sorry.

BRADLEY HAGERTY: And Brian Olmos(ph) was already running out of Pope Benedict memorabilia.

OLMOS: Well, the rosaries is big because, you know, the pope is always pushing for the rosary, to pray to rosary. And they're also easy to carry on with you.

BRADLEY HAGERTY: We asked Olmos if he is Catholic.

OLMOS: I sure am. It's the only way I could get here, so I do what I can. You know, you just got to do what you got to do.

BRADLEY HAGERTY: Including waking up before five to catch the subway to the stadium, which is what Mary Keller(ph) and Joe St. George(ph) did. The two freshmen from Catholic University didn't know what to think of the pope, but his first two days in the United States have won them over.

MARY KELLER: It was definitely hard transition for me to go to Pope Benedict XVI because I feel like he's so traditional, but he's done so much for the church with all his writings.

JOE SAINTS GEORGE: You know, I had that connection with John Paul II. I had not had the connection with Pope Benedict until yesterday. But I saw him, I felt it. I feel that not only myself, but I think America has connected with this pope.

BRADLEY HAGERTY: At precisely 9:30, Pope Benedict rode into the stadium and left the ball field in his white Mercedes pope mobile.

BRADLEY HAGERTY: The cheers were euphoric for the pope who was dressed in a red cape and gold miter.

BRADLEY HAGERTY: Opera star Denise Grace sang "We Are One," and thousands of faithful waved golden and white flags as the mass began.

After the gospel reading, Benedict put on his glasses and launched into his homily. This pope speaks in paragraphs, not sound bites, and his sentences are not for the faint of heart.

He called for an intellectual revival among American Catholics. This moment is a crossroads, he said, not only for the church, but for society.

BENEDICT XVI: It is a time of great promise, as we see the human family in many ways drawing closer together and becoming even more interdependent. Yet, at the same time we see clear signs of a disturbing breakdown in the very foundations of society.

BRADLEY HAGERTY: Signs such as a weakening of the moral sense, he said, a coarsening of social relations and a growing forgetfulness of God. Benedict warned that a shallow faith cannot steer through the shoals of secularism. Americans need to develop, quote, "an intellectual culture" that is genuinely Catholic which hews closely to the church's moral teachings on issues like abortion and homosexuality.

The Catholic Church is also at a crossroads, the pope said. And for the third time since leaving Rome, he raised the church's dark stain.

XVI: I acknowledge the pain which the church in America has experienced as a result of the sexual abuse of minors. No words of mine could describe the pain and harm inflicted by such abuse.

BRADLEY HAGERTY: The pope asked Catholics to forgive, to reconcile with the church, and to love those priests who did not violate their vows. Indeed, in his statement so far, Benedict has returned to those two themes: reviving a church beset by materialism, and facing into the sexual scandals of the past.

Priests then distributed communion to the 46,000 Catholics in a little over 20 minutes. After the mass, Kevin Murray(ph) said he agreed with the pope's warning about the secular culture.

KEVIN MURRAY: With modernism and everything that goes along with in today's society especially in United States, getting back to the foundations of the church and the roots of Catholicism, I think it really is important.

VERA OSUNWEI: I - the consecration was my favorite part. I almost went into tears but it was that powerful.

BRADLEY HAGERTY: She was grateful he raised the sex abuse crisis and asked for forgiveness.

OSUNWEI: I thought that was a (unintelligible) topic to bring it up because it's something that everyone has been thinking. And hopefully, you know, that's the end and we're going to move from that and learn from that lesson and go forward.

BRADLEY HAGERTY: Some would likely disagree that the American church can turn the page so quickly. But Benedict prevented himself as a teacher and a spiritual leader, and that seem to please the faithful, filling national stadium for today. 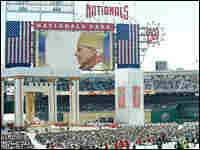 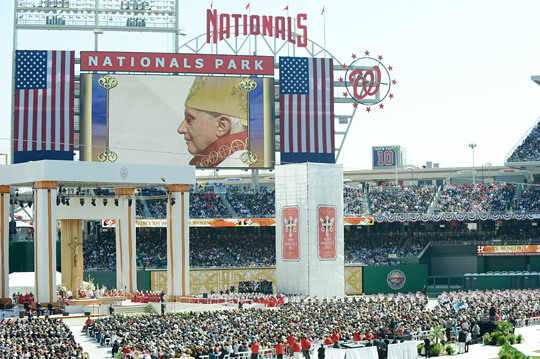 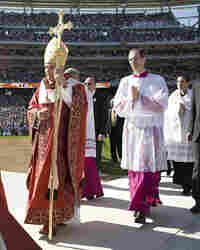 Tens of thousands flocked together for the first Mass by Pope Benedict XVI on his U.S. visit. Mandel Ngan/AFP/Getty Images hide caption 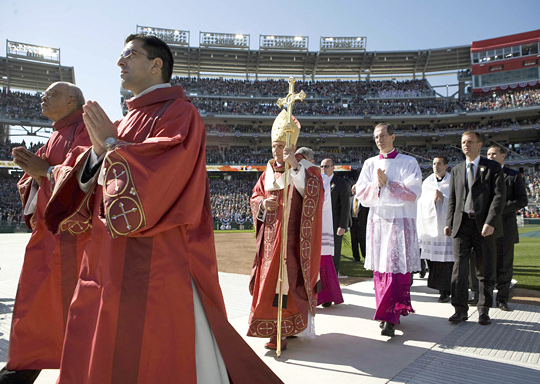 Tens of thousands flocked together for the first Mass by Pope Benedict XVI on his U.S. visit.

Pope Benedict XVI presided over an open-air Mass of 45,000 people at a Washington, D.C., baseball stadium, where hundreds of voices sang out to the masses during the pope's historic visit to the nation's capital.

Tens of thousands of people filled the baseball stadium to hear the leader of the Roman Catholic Church speak of his audience as a people of hope, which he called "part of the American character."

At the event, the German-born pope also acknowledged the pain and harm done to the victims of priests caught up in a sexual abuse scandal.

The pontiff made the remarks on the scandal, which has cost the church $2 billion and bankrupted several dioceses in recent years, as part of a homily to the multitude of faithful at the new Nationals Park, a new stadium.

"No words of mine can describe the pain and harm inflicted by such abuse," he said.

Benedict added that great efforts had been made to deal "honestly and fairly" with the aftermath of the scandal, in which it was discovered that priests who had abused children were transferred instead of being defrocked or turned over to police.

Benedict asked Catholics to love their pastors and to affirm the excellent work that they do.

After the Mass, Benedict is scheduled to meet with Catholic educators in Washington, and to meet with leaders of other faiths. The pope then heads to New York, where he will also hold a Mass and speak at the United Nations.