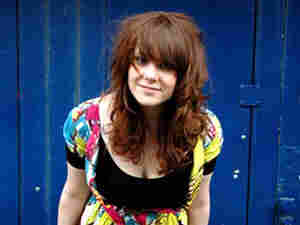 Though still only 20, English singer-songwriter Kate Nash has already topped numerous European pop charts and attracted massive buzz in the U.S. Her debut album, Made of Bricks, is full of sweetly infectious pop music, propelled by Nash's thick accent and effervescent personality. Click the link above to hear Nash perform a diverse assortment of songs from the album in concert from WXPN and World Café Live in Philadelphia.

Like her fan Lily Allen, Nash first attracted widespread attention online, and has since won armloads of U.K. awards. Made of Bricks came out here last September, but Nash is already working on its follow-up — when she's not making high-profile tour stops such as this one, of course.