Accessibility links
Young@Heart: 80-Year-Olds Rock Out : World Cafe Ranging in age from 72 to 88, the Young@Heart chorus members don't let age interfere with their passion for performing youthful music. Young@Heart's repertoire is more like a set list of rock's greatest hits, including songs by Coldplay, Sonic Youth, and The Clash. 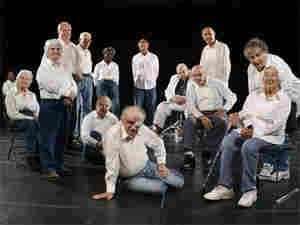 Ranging in age from 72 to 88, the members of the Young@Heart chorus don't let age interfere with their passion for performing youthful music. Originally formed in 1982, the group began in a housing project for the elderly in Massachusetts.

In this segment, host David Dye interviews Stephen Walker (director of Young@Heart), as well as chorus director Bob Cilman and members of the group. The film, in theaters this week, follows a chorus of elderly singers with a real passion for life.

Young@Heart's repertoire is like a set list of rock's greatest hits. The group sings songs by Lou Reed, The Rolling Stones, Coldplay, Sonic Youth, The Clash, and OutKast. Its debut album, Mostly Live, was recently released.