The fifth report in a six-part series 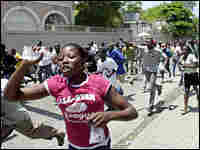 Haitians run through the streets in Port-au-Prince during protests Thursday against the skyrocketing cost of living. Thony Belizaire/AFP/Getty Images hide caption 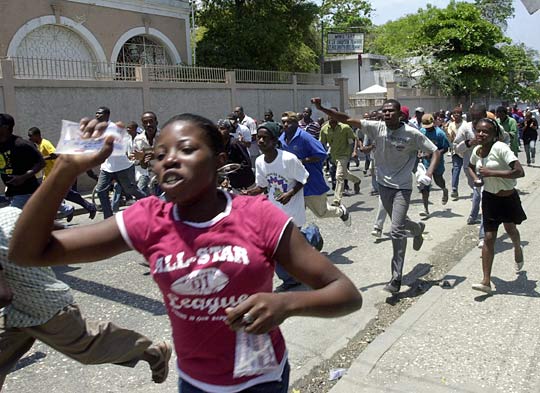 Haitians run through the streets in Port-au-Prince during protests Thursday against the skyrocketing cost of living. 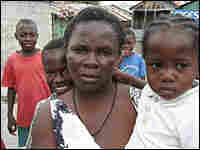 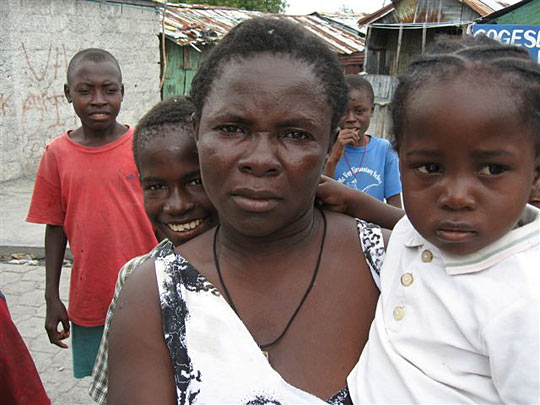 Marijo Joseph lives in the Port-au-Prince slum of Cite Soleil and cannot afford to buy enough food to feed her seven children. 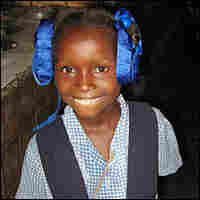 Delia Bonne-Annee, 10, is a student at the St. Vincent de Paul primary school in Cite Soleil. The school serves hot meals that have attracted cash-strapped parents who are desperate to feed their children. Julie McCarthy, NPR hide caption 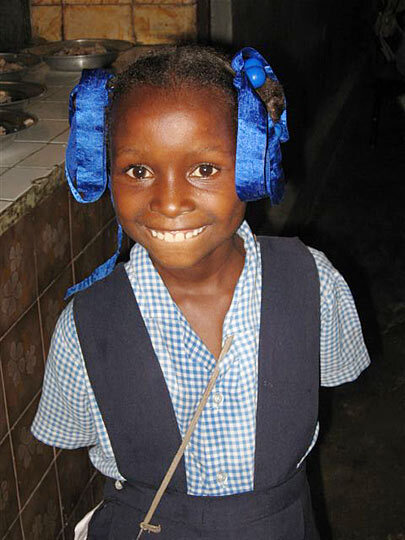 Delia Bonne-Annee, 10, is a student at the St. Vincent de Paul primary school in Cite Soleil. The school serves hot meals that have attracted cash-strapped parents who are desperate to feed their children.

Food riots last week in Haiti resulted in the deaths of six Haitians and a U.N. peacekeeper — and in the ouster of Prime Minister Jacques-Edouard Alexis. These events grimly illustrate how the rising cost of commodities threatens to deepen instability in the poorest country in the hemisphere.

Haitians are well-acquainted with scarcity: Most people here live on just $2 a day. And now, it takes nearly half that amount to buy a small container of rice.

"Obviously, people who are hungry have no stake in stability," he says. "And if we cannot respond to some of their basic needs, I think all of the progress we have made in the last three years will be at great risk."

On a recent day in the basement canteen of Saint Vincent de Paul primary school in Port-au-Prince, children dig in to plates heaping with beans and rice supplemented with vitamins. The school is able to provide lunch for only 1,300 of its 2,100 students.

UNICEF and the World Food Program are falling behind in donations, unable to keep pace with the spiraling cost of rice. It has hit $950 a ton, three times what it was at the start of 2007.

Still, Elnerve Petit, the school's headmaster, says the lunch program has proved to be a magnet for poverty-trapped parents desperate to feed their children.

"Now that we have the food program, enrollment has gone through the roof — we don't know where to put children," Petit says. "We don't even have problems of children not attending school because once they know they are going to get this one single meal, they're coming."

The school is located in the slum of Cite Soleil. There, skipping schoolchildren in tidy gingham uniforms provide one of the few images of innocence or order. Men sit idle, with no jobs, no prospects.

Resident Marijo Joseph, a mother of seven, says her husband abandoned her. She earns just $1.50 a day from selling old clothing on the streets and cannot afford food. She says feeding her children a meager meal of rice is like having them "drink bleach."

"Even if we buy a small tin of rice and cook it for all the children, it is so little," she says. "It doesn't do anything for their hunger. It only cleans and washes their stomachs."

At a nearby hospital, Dr. Frantz Pierre of the nongovernmental organization Medecins du Monde (Doctors of the World) says people are posing as patients on days the hospital distributes food to those in its care. He also says more children are being admitted for malnutrition and more pregnant women are showing up anemic. He calls the deprivation a "time bomb" and warns that "anything can happen" amid joblessness and food shortages.

Recent Measures 'Too Little, Too Late'

Apart from the conventional explanations for the global food inflation — drought and too much corn and soy diverted to produce biofuels — Haiti has its own complications. Economist Claude Beauboeuf says the Caribbean nation opened its market to imported food that flooded in, choking off national production. He calls it the "boomerang effect of savage neo-liberalization" and says the country is "paying the price of that."

Clutching a bag of greens, he says, "These are just leaves that I got to boil with corn, but I don't have the money to buy the corn. We're in a hole and have no voice."

The food crisis has prompted the United States, Canada and France to speed more aid to Haiti — and for the country to speed up the naming of a new prime minister. The United Nations, meanwhile, warns of more tense times across the globe as high commodity prices show no signs of falling.