Accessibility links
A Tradition of Political Protests at the Olympics Protests against the Chinese government's human rights record have prompted talk about boycott. There's a long history of political protests at the Olympic Games, including in 1906, when an Irish triple jumper competing for Britain climbed up the flag pole with an Irish flag.

Listen
A Tradition of Political Protests at the Olympics 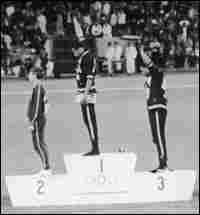 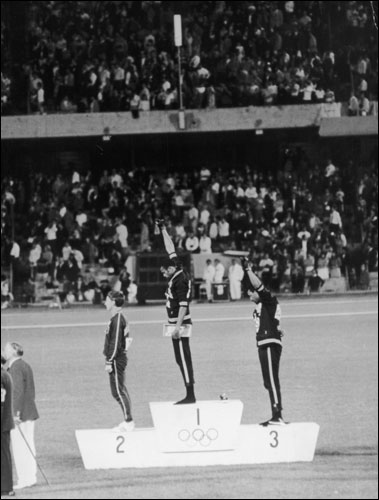 American track and field athletes Tommie Smith (center) and John Carlos (right) protest with the Black Power salute as they stand on the winner's podium at the 1968 Summer Olympic Games in Mexico City.

Read about some of the Olympics' major political protests.

Protests against the Chinese government's human rights record have prompted talk of a boycott of this summer's Olympic Games. Some world leaders say they'll skip the opening ceremony in Beijing although full boycotts seem unlikely.

Olympic history is packed with individual political moments. In 1906, Irish triple jumper Peter O'Connor didn't like competing for Great Britain, so he climbed up the Olympic flag pole "with an Irish flag and waved it in the air so people could see that he was Irish," Olympic historian David Wallechinsky says.

Wallechinsky says boycotts aren't as common, but they're the big stick of political protest. The first major boycott was in 1976, at the Montreal Games. More than 20 African countries stayed away because the International Olympic Committee didn't ban New Zealand after its national rugby team toured racially segregated South Africa.

Wallechinsky says the 1976 boycott was a bit of a stretch because the IOC "had already banned South Africa from the Olympics and, of course, rugby was not part of the Olympic movement."

Three years later, it was clear to see why a boycott might happen when the Soviet Union invaded Afghanistan.

"I have notified the Olympic Committee, that with Soviet invading forces in Afghanistan, neither the American people nor I, will support sending an Olympic team to Moscow," President Carter announced in his State of the Union speech.

In Atlanta, U.S. Olympic distance runner Dick Buerkle cursed the news of a boycott. "It was hard, I mean my family was kind of in favor of the boycott, and I was upset," he says.

Buerkle would've run the 5,000-meter even in Moscow; his track career ended a couple of years later. It took a lot longer to lose the anger. Now he says the Olympic boycott was probably better than sending soldiers at the time.

Jody Powell, who was Carter's press secretary in 1980, says the boycott and other retaliatory measures against the Soviets did the job.

"In the end, there was an international response; there was support for the Afghan freedom fighters and the Soviet Union was forced to withdraw from Afghanistan," Powell says.

Bin Laden and the Runner

But the withdrawal came nine years after the Olympic boycott. The Soviets were losing a costly, guerilla war — Afghanistan was called their Vietnam. Buerkle notes with irony that the impact on him of that invasion never really ended.

"I'm taking off my shoes today at the airport because of [Osama] bin Laden and because of people like him back in 1980 fighting against the Russians and we didn't get to go to the Olympics," Buerkle says. "So he's been a big part of my life for 28 years now."

It can be said the boycott by the United States and more than 60 other countries had some effect. It embarrassed the Soviets, who carried out a revenge boycott of the Los Angeles Olympics four years later.

Peter Ueberroth was the chief organizer for the 1984 Los Angeles Olympics. Now he's chairman of the U.S. Olympic Committee. At a USOC media event this week in Chicago, Ueberroth said there'll be no U.S. boycott of the Beijing games. Asked about a plan by some to boycott the opening ceremony, Ueberroth was dismissive.

"I just hope that anybody that doesn't go to the Olympic Games opening ceremonies has the good judgment to give their tickets to the families of some competing athlete," he said.

Betting on Change in China

Francios Carrard was the IOC's executive director in 2001, when the committee awarded the games to China. He said, at the time, "Some people say, because of serious human rights issues, we close the door and say no. The other way is to bet on openness. We are taking the bet that seven years from now, we will see many changes."

Those seven years are up, and some would say the IOC is losing the bet. The committee, and China, may avoid the boycott issue, but the scrutiny is sure to increase as the games approach and the stakes from that wager grow higher.