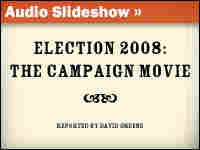 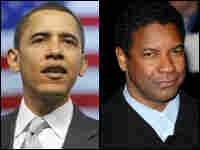 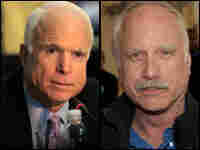 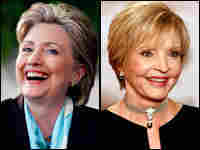 A completely unscientific survey of voters on the streets of Pennsylvania turned up some ideas. One voter thought actress Florence Henderson, of Brady Bunch fame, might be a good celluloid double for New York Sen. Hillary Clinton. Others said the role of Clinton called for a tougher actress — perhaps Meryl Streep — or one known for being brainy, like Jodie Foster.

When it came to casting the role of Sen. Barack Obama, Clinton's rival for the Democratic nomination, voters tossed out the names of some of Hollywood's leading African-American actors: Jamie Foxx, Cuba Gooding Jr., Denzel Washington.

So many suggestions .... I decided to take them to an expert, NPR movie critic Bob Mondello. He says if a film crew were actually casting this movie, they'd probably try to caricature the candidates.

"Hollywood falls back on stereotypes whenever it can, because that makes the storytelling easier," Mondello says. "You know the character; you don't have to explain things."

OK. That said, who would Hollywood cast as Obama? Mondello says at 54, Denzel Washington is too old to play the 46-year-old senator from Illinois. Will Smith, he says, could be a better option: "It's easier to make him look older than to make Denzel Washington look younger."

What's more, Mondello notes, Will Smith is known for giving uplifting speeches in films, and he also tends to play inexperienced, idealistic characters.

As for Clinton, Mondello agrees that Streep might be the perfect choice. "She has actually played a role that would make sense to think about — [in] The Manchurian Candidate, where she is the ultimate political operative," he says.

As for Arizona Sen. John McCain, the presumptive Republican nominee, Mondello offers actor Richard Dreyfuss as a possibility: "He played a very conservative-leaning senator in the movie The American President."

Of course, in that film, Dreyfuss' character has an attack-dog temper — just the kind of stereotype Hollywood loves.

So how would our professional critic review the presidential campaign so far?

"A really muddy exposition," he says, "and it's going to get eventually to the conclusion. It's taking way too long to get there."