Accessibility links
China's Growing Thirst for Milk Hits Global Market Got milk? China does. In just eight years, consumption of milk has almost tripled. New wealth and new dining habits among China's burgeoning middle class is driving that growth — which is helping to drive up dairy prices around the world.

The final report in a six-part series 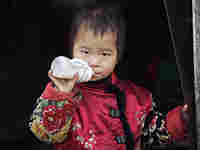 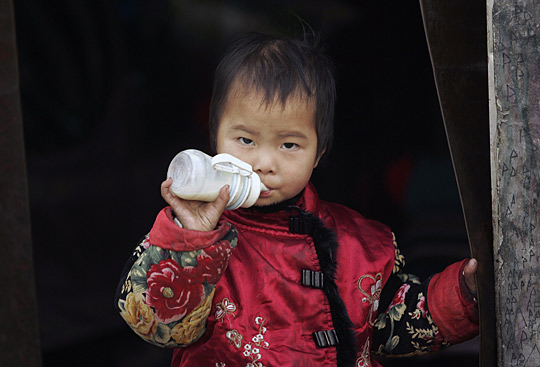 A young child drinks milk outside his home in Beijing. Milk consumption in China has tripled in just eight years. 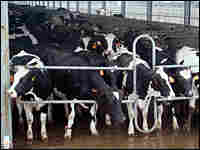 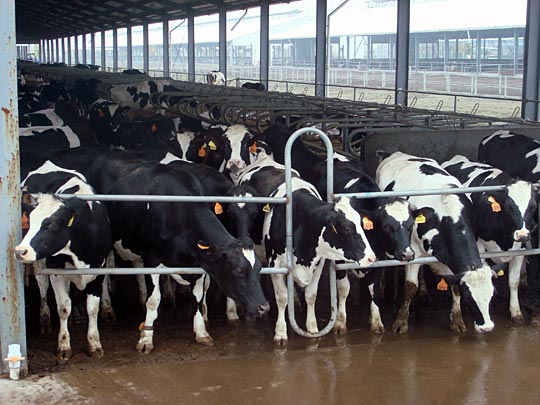 "I have a dream," Prime Minister Wen Jiabao of China once said. But his dream wasn't about civil rights for all or racial harmony. It was about a future where every Chinese child would have enough milk to drink — a half-liter a day for each child, to be exact.

Wen's vision has given rise to a gigantic new market of milk drinkers in China, even as the demand there and in other developing nations has driven up prices worldwide.

In the United States, for example, a gallon of milk now costs about the same as a gallon of gasoline. And in China, some shoppers say they'll have to cut back if the government doesn't subsidize milk.

The Chinese government has responded to the problem by placing curbs on milk prices since January. Even so, it has granted permission for another 10 percent price hike next week. Average milk consumption in China has nearly tripled in just eight years, driven by the newfound wealth and dining habits of China's burgeoning middle class.

"Some people think that drinking milk and eating bread are signs of a Westernized, modern lifestyle. But it's also more convenient than making rice porridge, which takes ages," says Cai Meiqing, a nutrition professor at the Shanghai Jiao Tong University.

At a recent dairy cow conference in Shanghai, the mood was one of optimism. Entrepreneurs at stalls selling milking technology vied for space with the publishers of Holstein Cow magazine, while novice dairy farmers put up posters seeking cows by the thousands.

The government offers big tax incentives and cheap loans to dairy farmers as China's demand for more milk to feed its huge, thirsty populace grows. The dairy market might be gangbusters, but Edward Zhang, who attended the conference and sells dairy equipment for the Swedish company DeLaval, says the rising milk prices don't necessarily translate into more money for farmers.

And even though fresh milk isn't easily exported, milk powder is, and this has also led to higher dairy prices. Only 7 percent of milk produced globally is traded across borders because it spoils easily, according to the Food and Agriculture Organization of the United Nations. This means that much of the international trade is in milk powder, which is then reconstituted to make milk or milk products.

"Dairy prices are beyond ... anybody's imagination from a year ago even, although they are slowly coming down," says Merritt Cluff, an economist at the Food and Agricultural Organization in Rome.

The biggest factor in increased milk prices, Cluff says, has been a change in European Union policy that resulted in subsidies to farmers being drastically cut.

The second-biggest factor is milk consumption in China and Southeast Asia, where "income-led growth has certainly changed the dairy sector around globally," Cluff says.

That, coupled with the effects of drought in major exporters Australia and New Zealand, has led to supply problems on the international markets. Headlines around the world lament Japan's "butter crisis," production cuts by Finnish cheesemakers and Hong Kong shoppers stockpiling baby formula. Some German consumers have taken to calling the Chinese — the world's biggest importer of milk products — "the milk snatchers."

But Wei Kejia, the vice president of China's Milk Association, says the country is being victimized unfairly.

"I don't think we in China are influencing the supply of dairy products in other countries. We're not importing that much," he says.

As Chinese dairy companies expand, their influence is being felt in unexpected ways.

The TV talent-show blockbuster Supergirl has an audience of 20 million and lets viewers vote for their favorite contestants. Its sponsor? Mengniu Group, a dairy company whose sales went up five-fold after the show debuted. The company ended up changing Chinese popular culture, and creating a whole new generation of milk converts along the way.