Accessibility links
Spurred by Rising Seas, Dubai's Floating Ambition Dubai will try just about anything; the bolder and more outlandish, the better. So two Dutch architects have opened a business there specializing in homes, offices and hotels that float. They hope their floating architecture will help coastal cities around the world survive climate change. 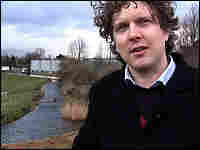 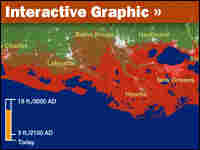 Find out how global warming may change coastlines around the world. 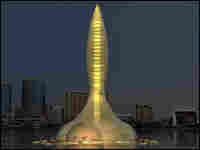 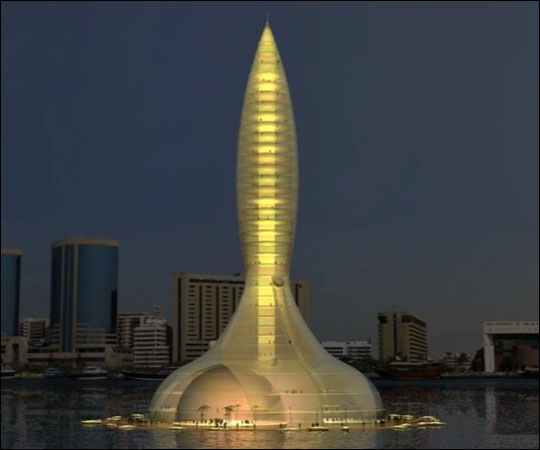 Architect's design of a floating tower. 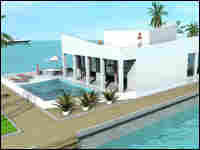 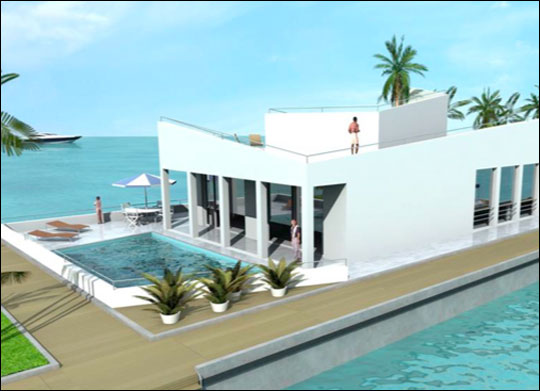 Architect's design of a floating house. 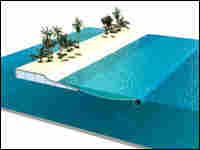 Dubai, it seems, will try just about anything. The bolder and more outlandish, the better. This Arab emirate, once a largely barren desert, now boasts the world's priciest hotel, the world's largest indoor ski slope and soon will be home to the world's tallest building.

Paul van de Camp moved to Dubai from Holland because of that "anything is possible" spirit. He isn't interested in skiing in the desert, but he has opened an office in Dubai to try to sell an equally bold concept: building on water. His company, Dutch Docklands, specializes in floating structures.

Constructing floating houses or restaurants or even villages is an idea that first came to him in his native Holland, where land to build on is scarce and water is plentiful.

The notion gained momentum for Van de Camp when he realized that rising sea levels from climate change made new ideas crucial. And it's an idea that's about to become a reality in Dubai.

Dubai has plenty of desert, but it also has miles of coastline along the Persian Gulf. They've built loads of artificial islands offshore, but they've run out of sand.

Van de Camp has given them a new option: floating islands.

He's just gotten the green light to begin building a string of islands, each in the shape of an Arabic letter. If you were to look at the proposed islands from an airplane or an orbiting satellite, they would spell a bit of Arabic poetry written by Sheikh Mohammed bin Rashid Al Maktoum, the prime minister of the United Arab Emirates and ruler of Dubai.

The verse reads, in part: "Not everyone who rides a horse is a jockey."

The floating islands will have hotels, restaurants and even a heliport.

This project might sound like the intersection of a wild imagination and an excess of money, but Van de Camp and his partner, Koen Olthuis, hope it's something more.

They want it to change people's expectations about where it's possible to live. And because experts say climate change will bring a global rise in sea level, Van de Camp and Olthuis say a change in thinking is essential.

"A really wide beach with palm trees on top of it," says Olthuis. "But made of foam and concrete, with layers of white sand on top of it. You walk into the water and it feels exactly like a normal beach, but this whole island will go up and down with the fluctuation of the water."

That ability to rise up and down with the water could make floating architecture a way to cope with rising sea levels.

There are no basements, of course.

Flexible pipes bring in water and electricity and carry away waste.

A Model for Coastal Cities

Olthuis sees Dubai as a test bed. He and Van de Camp wanted to test their ideas for floating architecture in their native Holland, but Van de Camp says they became frustrated.

But in Dubai, things are different.

"Because if the sheik gives you a license, that's a license," and you can start building right away, says Van de Camp. He says he's got several projects he's hoping to build there, including Olthius' floating hotels.

Although the two stand to make a tidy profit if the deals go through, Van de Camp says he and Olthuis are committed to building floating architecture for a much grander purpose: solving global problems. They hope to use the money they make here to undertake projects of a more humanitarian nature.

They've already designed a floating platform that people in Bangladesh could use to save livestock when flood waters rise.

But for the moment, they're tied to Dubai, with its wealth and its ambitions.

NPR Video Report, "Thinking Outside the Dikes: Architecture for a Changing Climate"