Accessibility links
Clinton, Obama Ad Wars Heat Up Ahead of Pa. Vote As the Pennsylvania primary approaches, Hillary Clinton and Barack Obama have both adopted a TV ad saturation strategy. The ad barrage began with warm and fuzzy spots, but recently, both candidates have begun focusing on the other's public gaffes. 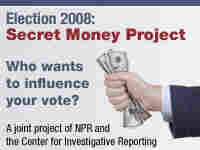 With three days to go before the Democratic primary in Pennsylvania, it's getting hard to watch even a small amount of television there without seeing a political ad. Barack Obama is outspending Hillary Clinton, but both campaigns are clearly going for a saturation strategy.

The Warm and Fuzzy Approach

The ads in Pennsylvania started out warm and fuzzy. In one ad, Clinton recalls summers she spent with her grandfather in Scranton, Pa.

"Every August, we'd pile into the car and head to our cottage on Lake Linoleum," Clinton says in the ad, which plays over a black and white snapshot of an astoundingly cute Clinton as a toddler, reaching for the camera.

Obama's advertisements focus on family, too. One ad features his Indonesian-American half-sister. She tells viewers: "People recognize themselves in Barack." The spot also features his wife, Michelle, who says, "Barack and I talk all the time about making sure that our girls can imagine any kind of world for themselves — with no barriers."

Obama's rainbow-coalition family reinforces the idea that he's the post-racial, post-racism candidate — without ever having to use those words.

Clinton is also reaching across racial lines, with an ad featuring Michael Nutter, Philadelphia's newly elected black mayor. Nutter tells viewers he supports Clinton because "she gets it. And she gets the job done."

Clinton is matching Obama's spending in the big cities, but not statewide. Evan Tracey is director of the Campaign Media Analysis Group at TNS Media Intelligence; overall, he says, Obama is outspending Clinton two-to-one.

"He's got a very disciplined regimen of ads," Tracey says, adding that Obama is using his deeper pockets to target multiple audiences. "He has the more up-tempo, more movement-based messages."

Indeed, in one ad, Obama fires up a cheering crowd with the words, "Let's go change the world!"

And Tracey says those are the ads that tend to show up on shows like American Idol, which skew to younger viewers. Obama also has ads on the more serious issues of the day, such as health care and education. Tracey says it really looks as if Obama is running at both ends of the baby boom.

But in the last few weeks, Clinton has challenged Obama's broad-based ad strategy with spots that try to bring him down a peg or two. One Clinton ad reminds viewers of an Obama ad in which the Illinois senator says he didn't take money from oil companies.

"No candidate does — it's been against the law for a hundred years," the ad tells viewers. "But Barack Obama accepted $200,000 from executives and employees of oil companies."

And then, after "BitterGate" erupted, Clinton went on the air with an ad in which average people tell the camera how insulted they were by Obama's comments suggesting people in small towns cling to guns or religion as a way to explain their frustrations. One person featured in the spot says: "It just shows how out of touch Barack Obama is."

Tracey says his data show this ad is airing everywhere in Pennsylvania — except Philadelphia. Obama has responded by making ads about Clinton's ads.

Clinton was briefly booed during a speech on Monday when she told the audience, "I know that many of you were disappointed by recent remarks that he made," referring to Obama's "bitter" comment. The Obama campaign quickly packaged that moment for TV — with boos that sounded ever louder. The announcer in that Obama ad tells viewers that "there's a reason people are rejecting Hillary Clinton's attacks — because the same old Washington politics won't lower the price of gas."

An Opening for McCain?

Still, neither candidate has yet dared run classic negative ads — the kind with dark images, grim music and a voice-of-doom announcer. Republican media consultant Pat Griffin says the campaigns are being careful not to offend voters. But he says they're being so careful, even their edgier ads seem generic.

"The Democrats have lost their ability to use advertising, no matter how many gross rating points they're buying, to kind of cut through," Griffin says. He thinks the sheer volume of Democratic ads has also had a numbing effect; McCain is shrewdly sprinkling in a few ads of his own.

Griffin explains the McCain strategy: "What it does is it allows people who are frustrated with the ongoing food fight between Clinton and Obama to say, 'You know, this guy McCain isn't so bad. He's looking like an adult.'"

Griffin says he's watching the Democratic ads to find fodder for his own Republican spots this fall.