Accessibility links
San Francisco Reacts to Shortage of Bees A national survey of the bee population found that there are half as many bees as there were 50 years ago — and the lack of pollinators is particularly acute in urban areas. 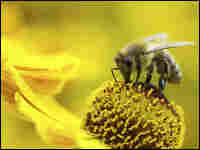 The FX version of the Scandinavian series The Bridge, like the Showtime network's version of the Israeli TV series that inspired Homeland, is a major revamp as well as a crucial relocation. With Homeland, the focus became American politics and home-soil terrorism. With this new adaptation of The Bridge, the setting is changed to the U.S.-Mexico border. This allows executive producer Meredith Stiehm, a writer-producer from Homeland, to deal with everything that relocation provides — including the white-hot issues of immigration reform and border security.

The Bridge opens with a crime scene that couldn't be more symbolic, or more gruesome. An unknown killer has managed to place a body on a border bridge between Juarez, Mexico and El Paso, Texas, so precisely on the border that half of the body is in each country. That makes it, at first, a jurisdictional issue for the respective first responders — an El Paso police detective named Sonya Cross, and a Chihuahua state policeman named Marco Ruiz. Sonya is played by Diane Kruger, the German actress from Inglourious Basterds. Marco is played by Demian Bichir, who played Mary-Louise Parker's Mexican husband in Weeds, and was Oscar-nominated for his supporting role in A Better Life. In an early scene from the premiere, Sonya claims the on-the-border murder case, but within hours, she reaches out to Marco when a new development changes things. Oh, and Sonya, like Claire Danes' character in Homeland, is doing her job while struggling with a disorder.

The killer is making a point — the first of many — in a way to ensure that the issues he wants to address demand international attention. And very soon, his agenda involves many characters who, at first, seem to have little to do with one another. But, as one promotional tag line for this series says, "Everything is connected" — beginning with those two bisected bodies.