Accessibility links
Duke Student Targeted for Mediating Tibet Protest Duke University undergraduate Grace Wang attempted to referee a heated interchange on campus over the Tibetan independence movement, leading to fierce denunciations of Wang and her parents by ethnic Chinese in the U.S. and in China. 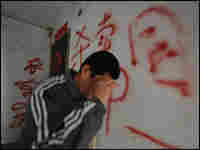 A neighbor in the Chinese city of Qingdao walks past graffiti saying "Kill everyone in the home" and "Kill traitors" painted outside the family home of Duke undergraduate Grace Wang. Mark Ralston/AFP/Getty Images hide caption

Duke University undergraduate Grace Wang attempted to mediate a heated interchange on campus two weeks ago over the Tibetan independence movement. After fierce denunciations of Wang by ethnic Chinese in the U.S. and in China, her parents in China have been forced into hiding. Wang says she is proud of her actions and is angered by threats her family has received.

Wang stresses that she doesn't support Tibetan independence; she just wanted to intervene when she saw a crowd of 400 to 500 people — mostly Chinese citizens — squaring off against 12 pro-Tibet protesters. She even gamely wrote "Free Tibet, Save Tibet" on one student's back in an agreement brokered on the fly to get him to talk to some of the pro-China demonstrators.

She says the phrase "Free Tibet" can mean a lot of things, but to her, the heart of the Tibetan problem involves access to education for children. "Tibetans don't enjoy the same freedoms that the Han Chinese would enjoy," she says. "Tibetan children don't have the equal amount of opportunity."

Within a day of Wang's attempt to referee the protest, word got back to China and Wang became the focus of vicious attacks on the Web. In an image posted the next day on a popular Internet portal, Wang appeared with the word "traitor" written on her face. "I was very shocked," she says. "I almost had a heart attack."

Since the protest began to make headlines, Wang has struggled to stay in touch with her parents, who went into hiding following threats that were painted on the family's apartment in the Chinese city of Qingdao.

"I try to e-mail them," she says. "Whatever way I use to contact my parents, the Chinese government is going to censor anyways. ... I try to talk about something else while referring to their safety."

Wang says she has tried to ask her parents if they want political asylum. She says they have responded by stressing that they are Chinese and shouldn't betray their country — nor should she, they say. Wang isn't sure those are really her parents' words, but she is pretty sure of one thing: "I don't think they want to leave," she says. "They love China just as much as I do."

On the Duke campus, at least, Wang feels safe. "I know what I'm doing is right," she says. "I have more friends than people who are condemning me."