Accessibility links
Sia: Seeing Ghosts, Pushing 'Buttons' For the work of an artist best known for the symphonic, soul-baring "Breathe Me," Sia's punchy "Buttons" seems like an odd fit. A hidden track on her new album, the hooky "Buttons" nevertheless runs the risk of defining its album in spite of itself. 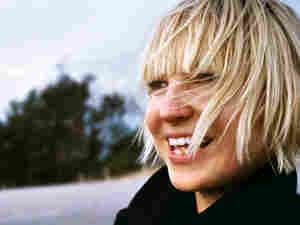 Sia is known for the symphonic, soul-baring "Breathe Me," but she shows a punchier side in "Buttons." courtesy of Sia hide caption

For the work of an artist best known for the symphonic, soul-baring "Breathe Me" — the go-to tearjerker for the final scenes of Six Feet Under and a malaria montage on the recent Idol Gives Back telethon — Sia's punchy "Buttons" seems like an odd fit. Indeed, the Australian singer tucked it away as a hidden track on her newest album, Some People Have Real Problems.

But Sia can't think the song is too much of a departure, considering her tendency to open her live performances with it. Atop a quirky bed of drums and keyboards, she unloads with a vocal line that consists of little more than a single note spat out at a steady eighth-note rhythm. The result sounds oddly syncopated in the way it abandons the stress and emphasis of normal speech and reduces the words themselves to their constituent syllables.

By the time she hits the chorus, Sia starts seeing ghosts, one of which probably looks an awful a lot like Lene Lovich. It's the culmination of the playfulness that has been simmering quietly throughout Some People, bringing it to the fore at a point when most listeners would assume Sia had said her piece. Sharp and hooky, "Buttons" runs the risk of becoming the most maddening kind of hidden track: a song that defines its album in spite of itself.