Accessibility links
'Baby Mama' Saturday Night Live's DNA is all over this surrogate-pregnancy comedy, in which a sophisticated single businesswoman recruits a South Philly dim-bulb to bear the child she can't carry herself. 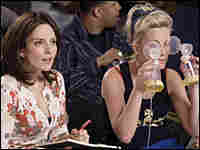 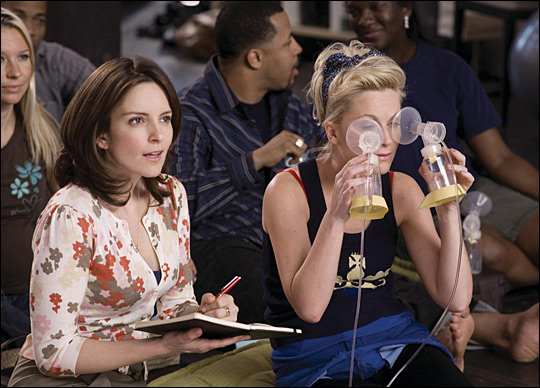 Saturday Night Live's DNA is all over this surrogate-pregnancy comedy: comedians Tina Fey and Amy Poehler as the sophisticated mom and dim-bulb vessel, SNL guest stars in lesser roles and an SNL writer making his directing debut. So the obvious question: Do they, um, deliver?

Well, there are plenty of laughs. Also a plot line that plays like a series of comedy sketches — Fey baby-proofs the apartment, which means Poehler can't open the toilet; Fey works for an all-organic retailer, but Poehler only likes junk food, and so forth.

Scene-stealing subordinate characters – a ponytailed, crunchy-granolified Steve Martin as Kate's boss, Sigourney Weaver as an alarmingly fertile-in-her-50s surrogate-agency rep, Siobhan Fallon as a consonant-challenged birthing instructor, and especially Dax Shepard as Angie's breathtakingly trashy common-law hubby — animate the margins of the story. And if the plot is predictable, it's a perfectly serviceable clothesline for writer-director Michael McCullers' jokes.

Would those jokes be better served by a more experienced director? Probably. Still, McCullers' tendency to step on laughs won't be as noticeable when the film hits DVD in a few months. And in that format, if you hear your inner clock ticking during the last half hour, you'll be able to hit fast-forward.