Accessibility links
The Helio Sequence: A Two-Man Wall of Sound When The Helio Sequence set up in KEXP's studio with just one guitar, one drum kit, and two microphones, few expected such a full sound to emerge. Many challenges faced the band as it made Keep Your Eyes Ahead, yet its end result on CD and in the studio reveal focus and power.

Listen
The Helio Sequence: A Two-Man Wall of Sound

The Helio Sequence: A Two-Man Wall of Sound 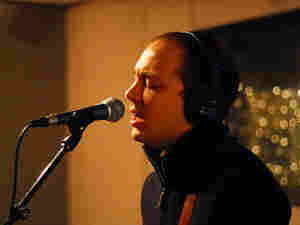 Two guys. One drum kit. One guitar. Two microphones. Seeing such a bare-bones set-up, it's easy to get a little nervous about what that's going to mean for a studio session. It's different when there's one musician with a guitar — that seems easy to pull off. A full band also seems like a no-brainer. But listening to The Helio Sequence's new record, Keep Your Eyes Ahead, you have to wonder how the duo will pull it off live — let alone in a small space, early in the morning, with this kind of setup.

Before the performance, I had been counting the hours until the band was to play. Every day, I would play Keep Your Eyes Ahead and tell anyone and everyone that it was the best thing to come out so far in 2008. The anticipation was heightened even more by the fact that the record was being released the day the duo was in our studio.

Luckily, the session was exactly what I'd hoped for and more. The two best friends had been working on the album for some time, and overcame serious issues (like Brandon Summers' damaged vocal cords and the temptation for Benjamin Weikel to shift over to the Modest Mouse camp). You can hear that focus and cohesiveness in the recording, but watching The Helio Sequence live, you could really see these two as tight, talented musicians. While sitting in on the session, I was able to catch all the subtle moments, like the two of them exchanging a few smiles during the performance. Almost a "Man, this is fun!" kind of look. It sent chills down my spine to hear that kind of passion on the radio. Moody shifts, doo-wop-infused anthems, and total clarity and cohesion marked this session as one of the best of 2008.