The Starving Dog: Real or Not? 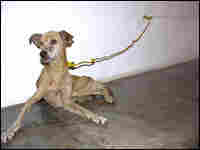 Costa Rican artist Guillermo Vargas has faced a storm of online criticism after his art exhibit featured what looks like a starving dog. From ElPerritoVive.blogspot.com hide caption

Costa Rican artist Guillermo Vargas has been accused of creating a sensation — not art — after he reportedly tied up a stray dog and left it to starve. Photos of the exhibit show its title, You Are What You Read, spelled in dog food on a wall, beyond the animal's reach. Online protest flared as the images circulated on blogs like ElPerritoVive (The Doggy Lives).

Meanwhile, a Yale University student claims to have artificially inseminated herself and then induced miscarriages — for an art project.

In considering the boundaries between the shocking, the controversial and the profound, New York University art professor Randy Martin says both projects are part of a long history of artists using challenging work to criticize society.

Once Yale University determined that everyone involved in the miscarriage project was safe and unharmed, Martin says, the administration's most urgent responsibilities ended. School officials reportedly asked Aliza Shvarts to issue a statement calling her project "creative fiction."

"I think that's very interesting with respect to an art project," Martin says.

He says the matter of whether Shvarts actually did inseminate herself is beside the point. The purpose of the project — to inspire debate — is concerned less with the "truth of the materials than the truth of its ideas."

He continues, "A lot of the dialogue about reproductive health rights has to do precisely with this passing between fact and fiction."

Some critics, though, say art that does little more than titillate and shock is problematic. Martin acknowledges the many critics who say eliciting a reaction is the shallowest of justifications. "But after Andy Warhol ... who isn't trying to elicit a reaction?" Martin asks. "That is the medium of culture we're operating in."

He cites free-for-all reality TV shows as another manifestation of a long tradition. Martin says that like Pablo Picasso, Marcel Duchamp and the Dadaists, Vargas and Shvarts join "a whole series of artists who position themselves in critical relation to the world, and saw themselves as the bearer of a kind of explosion into that world."