Accessibility links
Feet Hurt? Stop Wearing Shoes It took 4 million years of evolution to perfect the foot, and humans have been wrecking that perfection with every step since they first donned shoes, New York magazine's Adam Sternbergh says.

Need a little mercy for your sole? 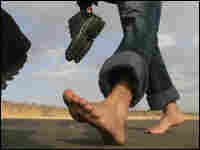 It took 4 million years of evolution to perfect the foot, and humans have been wrecking that perfection with every step since they first donned shoes, New York magazine's Adam Sternbergh says.

"Everyone who wears shoes walks wrong," he says, echoing the headline of his recent article, "You Walk Wrong."

Sternbergh calls the ubiquity of footwear a "conspiracy of idiocy." He points out the probability that at no point did any shoemaker say, "Let's design something that works with your foot." In the Middle Ages, for example, people began wearing shoes with higher heels to avoid stepping in other people's excrement. Today, high heels are considered sexy. Whatever their reasons for wearing the shoes they wear, people don't usually consider whether a shoe actually works with their foot, he says.

The human foot works pretty well on its own, Sternbergh says, and it doesn't need a lifetime of help from shoes. He explains the basic illogic of footwear by comparing the concept to a perpetual cast. "Imagine if someone put a cast on your arm when you were 3 years old and you never took it off," he says. "Your arm would stop working. That's kind of what's happened with our feet."

Why are shoes on virtually every foot, then? Sternbergh says the rationale that most urban and suburban people use is that the ground is hard and our feet need the cushioning of footwear. "But in many places in the world, the ground is quite hard," he says. "[Our ancestors] were able to absorb the shock."

Sternbergh concedes that in most settings, some form of foot covering makes sense. "I'm not going to convince anyone to walk barefoot," he says, acknowledging that he continues to wear shoes as a bulwark against glass, grime and gross things.

He may still wear shoes, but Sternbergh has switched to a model from England called the Vivo Barefoot from the Clark shoe family. Galahad Clark, son of the inventor of the Wallabee — a particularly successful, if traditional, shoe — helped develop the Vivo Barefoot. Sternbergh says the shoe is basically a slipper with a Kevlar sole, to prevent puncturing.

"They kill your heels," he says. "A traditional shoe advocate would say you need to switch back to sneakers that have a big cushiony heel." But a barefoot-walking advocate would say, "You're walking wrong," Sternbergh says. He asked Clark for advice or instruction, but Clark said walking in the shoe is instinctual.

"You'll find that your walk starts to change," Sternbergh says. "You land on your heel, but it's a much softer landing. ... A traditional shoe with a lot of cushioning is designed to allow you to walk with the bad habits that you have because you've been wearing shoes all your life."

For those who cling to their typical footwear, Sternbergh is sympathetic. "Shoes perpetuate shoes," he says, referring to the cycle of coddled feet forever needing high-tech swaddling. "It's a classic self-perpetuating system."