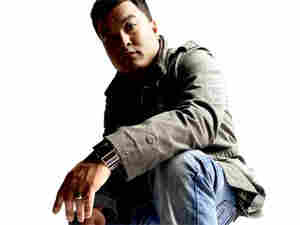 Tom Shimura, better known as the artist Lyrics Born, has a new album called Everywhere At Once. Courtesy of the artist hide caption

Tom Shimura, better known as the artist Lyrics Born, grew up in Tokyo and Salt Lake City but went on to found the Quannum Projects label, an independent collective in the Bay Area. The new album Everywhere At Once shows off the rapper's distinctive, complex rhyme schemes and live instrumentation.

Billy Bragg has been known as many things: busker, punk rocker, protest singer, Woody Guthrie interpreter. Freedom du Lac says Bragg's new record Mr. Love & Justice — which took its name from a book by British author Colin MacInnes — is "not looking to reinvent the wheel. Singing about love, war and politics, you know it's Billy Bragg same as he ever was, which is not necessarily a bad thing."

Ashlee Simpson, sister to pop singer and former reality television star Jessica, returns with Bittersweet World. The record was heavily-produced by Timbaland, Chad Hugo of the Neptunes and a whole team of studio writers hoping for a hit.

For his latest, Momofuku, Elvis Costello decided to pre-release the album on vinyl before a CD hits the stores two weeks later. While the move is not the first to attempt to rethink the distribution of music, the hope is to encourage sales by including the tracks as free mp3 downloads to those who purchase the record.