Accessibility links
Hold the Carbon: Cafeterias Focus on Green Fare A restaurant firm is helping museums, schools and corporations reduce their carbon footprints through its lunch menu. With Bing cherries replacing pepperoni, will employees stick to the low-carb diet? 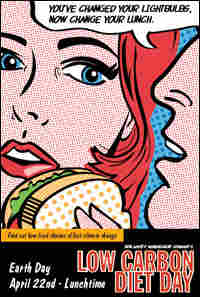 In the first part of the series, we examine how food relates to greenhouse gasses.

This is the second in a five-part series.

From production to processing, transport to trash can, meals and snacks can leave a large environmental footprint. One company aims to slow this trend with a new low-carb menu. Carbs — as in carbon.

Bon Appetit Management Co., based in Palo Alto, Calif., operates lunchrooms at museums, schools and corporations. In implementing a new menu at 400 cafes and cafeterias, the company considers the carbon footprint of each food's entire life cycle. For example, employees at eBay's Silicon Valley headquarters will find environmentally friendly pizza toppings such as dried Bing cherries, peaches and caramelized fennel replacing their traditional pepperoni and mozzarella.

Meat and cheese are among the most carbon-intensive products around, explains Helene York, architect of the menu redesign. That's why she's called for dramatically decreasing their use.

York notes transportation in explaining why cheese will have only a minor presence: "The cow eats the feed, the milk is processed and transported in refrigerated trucks. If it comes from a long distance, it's put on an airplane."

The company requires its food managers to stop importing bottled water from overseas and to guard against wasting food.

"You need to think like a squirrel, you know?" says eBay chef Bob Clark, who already applies those principles, often freezing food for later use.

The benefits of a low-carbon diet extend beyond the environment, Clark says. Cutting back on beef, dairy and processed foods can reduce overall food costs. And low-carbon items from local farmers tend to make the best meals, he insists.

Not everyone is convinced. The steamed vegetables at Bon Appettit's green cafeteria at Mills College in Oakland, Calif., taste a lot like gym socks, according to junior Melissa McDonough.

"There's a lot of placards telling you to eat green and be environmental, but the taste and freshness of the foods seems lackluster," she says.

York says there are kinks, but overall she's content with her company's progress. Its goal is to reduce meat and cheese purchases by 10 percent this year; so far, it has cut back by nearly 20 percent.

Adapted from Bon Appetit Management Co. Ideally, use ingredients grown or produced locally and compost the vegetable trimmings. For an even lower-carbon meal, bake other meal items at the same time.

In large mixing bowl, combine pureed mixture and panko crumbs, working with your hands until mixture becomes firm and no longer is sticky. Shape into loaf and put in pan.

Bake at 350 degrees F. for 25 to 30 minutes, or until the vegetable loaf's internal temperature reaches 165 degrees F.