Accessibility links
Israel Rejects Palestinians' Unity Deal Palestinian leaders are moving toward a unity government, but Israel has already rejected the agreement between Hamas and Fatah, calling it a step backward in the quest for peace in the Middle East. 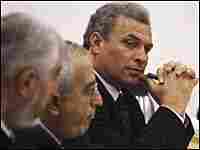 The Palestinian parliament Saturday approved a new power-sharing government that it hopes will end months of factional violence, economic sanctions and international isolation.

But Sunday, Israel's Prime Minister ruled out any contact with the new government, and it appears that most Western powers also will continue to boycott the new coalition.

Spokeswoman Miri Eisen says Israel will maintain a limited dialogue with President Abbas but only on basic, day-to-day humanitarian issues.

"But not on issues of substance, not about negotiating a settlement," Eisen says. "Sadly we won't be able to do that since he has a government which he just appointed which so clearly does not recognize Israel and thinks that they can achieve a state through terror, through violence."

In spite of Israel's firm stance, Palestinians are hoping some Western governments will now work with non-Hamas members of the new coalition. On Sunday, U.S. Consulate officials in Jerusalem said they won't rule that out but said that the year-old ban on direct aid to the Palestinian government will remain in place.

John Ging says the UN wants the new government to stop merely talking about security and show real progress on the ground. Ging notes that the UN agency that was attacked provides weekly food aid, health care and education to nearly one million Palestinian refugees across Gaza.

"So we are very committed to continuing with that, but we have to have a safe and secure environment," Ging says. "And now the test is whether these gunmen will be found and arrested. That is what we want to see happen."