Accessibility links
Paul Kelly: The Rootsy Side of Life : World Cafe Since the 1970s, Australian songwriter Paul Kelly has explored a rustic approach to pop-rock and country music, sometimes recording under pseudonyms for his various projects. His 25th album, Stolen Apples, features striking biblical imagery, especially in "God Told Me To."

Paul Kelly: The Rootsy Side of Life

Paul Kelly: The Rootsy Side of Life 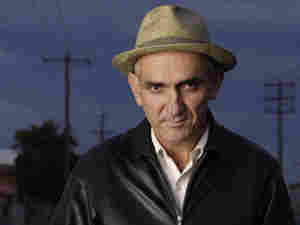 Though he's been churning out music for more than three decades, Australian songwriter Paul Kelly isn't widely known in America. Since the 1970s, Kelly has explored the rootsy side of pop-rock and country music, at times recalling Bruce Springsteen, Nick Lowe, or Tom Petty while sometimes recording under pseudonyms.

In a session with host David Dye, Kelly talks about his 25th album: Stolen Apples is a musically diverse disc that fits comfortably into Kelly's catalog while continuing to explore outside his niche. The lyrics prominently feature striking Biblical imagery, particularly in "Gold Told Me To."