Accessibility links
Holly Robinson Peete Shares Motherly Wisdom In a wide-ranging interview, actress Holly Robinson Peete talks with Farai Chideya about her new book, her charitable work through the HollyRod Foundation, and shares how she faces some of her life challenges, including her son's autism. 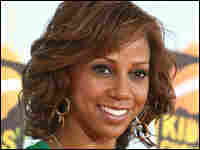 Actress, author, and radio personality Holly Robinson Peete has written the forward to a new book, titled Book of Life: Making Your Best Days Happen. It's a collection of contemporary words of wisdom from mothers.

In a wide-ranging interview, she talks with Farai Chideya about the HollyRod Foundation — which raises awareness about Parkinson's Disease — and shares how she faces some of her life challenges, including her son's autism.