Accessibility links
Saudi Produces Video Response to Anti-Islam Film A young businessman in Saudi Arabia has produced a video in response to short film portraying Islam as a violent ideology that has provoked anger in the Muslim world. The new video, Schism, matches Bible verses with scenes of violence by Christians. 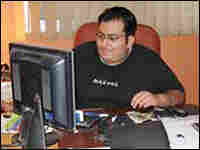 Raed al-Saeed is the creator of "Schism," a six-minute video response to "Fitna," a controversial video by Dutch lawmaker Geert Wilders that depicts Islam as a violent and fascist-like ideology. Caryle Murphy hide caption

A video portraying aggressive behavior by Christians matched with verses from the Bible is gaining traction on the Internet.

Raed al-Saeed, a young businessman from Saudi Arabia, is the creator of Schism, a six-minute video response to Fitna — a short film released last month that portrays Islam as a violent, fascist-like ideology. "Fitna" provoked anger in many parts of the Muslim world.

Fitna, which in Arabic means discord or social strife, was posted on the Internet by right-wing Dutch politician Geert Wilders. It pairs verses from the Quran exhorting violence with scenes of deadly suicide bombings and planes flying into the World Trade Center.

Saeed, who runs an audio-visual company out of a rundown villa on a quiet, tree-lined street in Riyadh, says he remembers feeling helpless after watching Wilders' video. But then he realized there was a way for him to try to protect his religion and way of life: Answer the video with a video of his own.

A part-time blogger, Saeed decided to use the same technique Wilders used in Fitna. His point was to show that it is possible to make almost any religion look bad.

"It's not the right way to judge a religion by a video made by a guy who hated that religion," Saeed says. "Anybody can take any holy book — even ... the Holy Bible — out of context and make it look, sound evil."

His video opens with biblical quotes, including one from the Book of Samuel that urges the destruction of "everything that belongs to" the Amalekites. "Do not spare them," it says, "put to death men and women, children and infants, cattle and sheep, camels and donkeys."

Footage that Saeed found on the Internet follows. One scene shows what appears to be Western soldiers in Iraq beating up alleged insurgents. Another clip is a CNN broadcast of "Shock and Awe," the 2003 aerial bombardment of Baghdad that opened the U.S. invasion of Iraq.

A day after Saeed posted his video on YouTube, it was taken down for having "inappropriate content." He immediately reposted it with a message arguing that if his video was inappropriate, then Wilders' Fitna also should be removed. For now, both videos are available on the site.

Schism had so far been viewed more than 300,000 times on YouTube. Saeed says he has been gratified by the response to his video, noting that many comments about it on YouTube were positive. Several Dutch viewers thanked him and said they disapproved of Fitna.

Saeed says he thinks these people are trying to say that he and others like him are supporting Islam and serving their religion — and the world — better than the likes of Osama bin Laden.

Most of the people commenting on his video understood that he was making a statement about how religions are judged, rather than defaming Christianity, Saeed says.

"It's not my goal to attack Christianity. ... I wouldn't attack a religion made by a prophet that I believe in," he says.

Saeed says he believes he is well-qualified to make his video. In November 2003, he was at a residential compound in Riyadh when terrorists attacked with guns and a suicide car bomb. Seventeen people, including five children, died and more than 100 people were injured. Saeed was not hurt, but the experience deeply affected him.

He says he has since read about the attack and how the compound was characterized as hosting FBI and CIA.

"I've been there and I know all the neighbors, I know everybody there. There is a mosque in there. They pray there five times a day. I know what's in there," he says.

Because he survived the horrific attack, Saeed is fond of saying that he has a "new birthday." And following the Arabic practice of putting the day first and the month second, he notes the irony of that date: 9-11-2003.