Accessibility links
Doctors Get a Crash Course in Healthful Cooking Chefs at the Culinary Institute of America have teamed up with Harvard's medical school to show Americans how to make healthful food instead of quickie meals of pizza or taquitos. And they're starting with physicians.

Listen
Doctors Get a Crash Course in Healthful Cooking 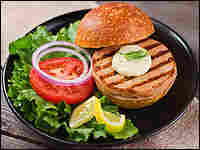 Click the links below to see recipes, courtesy of Michelle Hauser and John Ash. 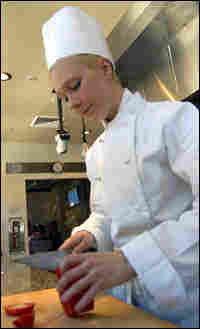 If your cooking is in a rut, remember this: Recipes are suggestions, not rules. Too many people are afraid of experimentation, says Michelle Hauser. But the suggestions she's compiled below make kitchen creativity easy.

Use the lists to adapt your recipes to ingredients you have on hand. Don't have cucumber? Try carrots. Or, mix and match to create a dish from scratch: How about a sweet potato onion curry with sesame seeds? Get creative, and get cooking. 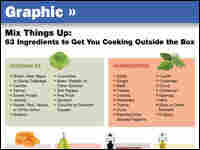 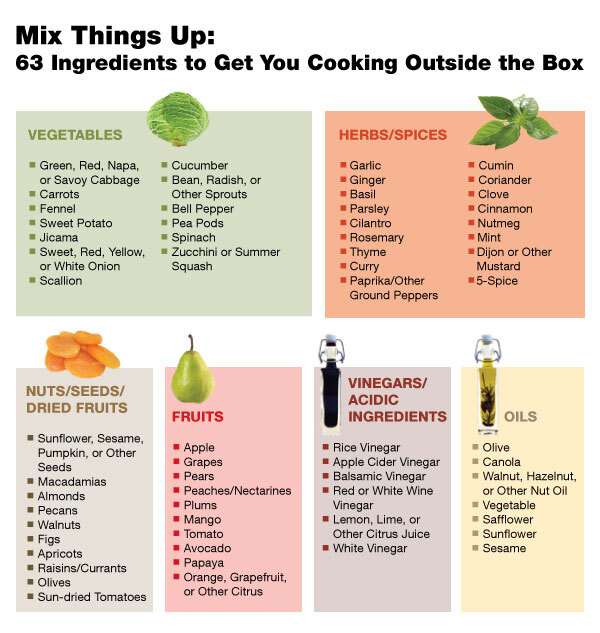 A dinner of salmon and arugula might sound like an appealing meal, but for many people, what winds up on the table is more along the lines of frozen pizzas or taquitos.

Chefs at the Culinary Institute of America would like to help Americans learn to eat better — and they're starting with a key group of diners. Through a collaboration with Harvard University's medical school, the chefs and at least one med student are training doctors to cook.

At a conference earlier this month at the CIA's campus in St. Helena, Calif., about 300 doctors and health professionals got a crash course in making meals that are healthful and tasty.

One of the instructors was Michelle Hauser, a former professional cook and third-year medical student at Harvard. She demonstrated how to whip up healthy meals in under 20 minutes for less than $20. On the menu today: an easy-to-prepare salmon burger recipe.

"So I'll dump my two cans of salmon into this bowl," Hauser says, speaking into a microphone. She talks up the health benefits of all the omega-3 fatty acids in salmon and assures the class that anyone can follow her recipe.

"I gave it to someone who absolutely cannot cook. And they made dinner successfully," says Hauser, who whips up a coleslaw to complement the burgers.

As the first of the salmon patties come off the stove, students gather around to taste.

"It's delicious — very good," says Dr. Tasha Tomlinson, who has a practice in Hanford, Calif.

The salmon burgers are low in saturated fat and packed with nutrients. Tomlinson says she's going to take the recipe back to her patients.

"In my practice, we have an epidemic of women who are sedentary and overweight," she says. "And they're always asking for help to get back on track."

Tomlinson says she'd also like to set up demonstrations for the diabetes support group.

"They could learn one or a couple new recipes to incorporate into weekly shuffle," she says.

As doctors learn from the demonstrations, Hauser says, they may become less intimidated in the kitchen. Then perhaps both doctors and their patients can focus on eating better.

"Intention is the driver of all behavioral change," says Dr. David Eisenberg of Harvard Medical School, who initiated the collaboration with the Culinary Institute of America a few years ago. He says healthy and delicious go naturally together — but sometimes people need a little education and help. Doctors can be leaders in this area, he says.

Many of the physicians attending the Culinary Institute/ Harvard conference say they want to spend more time focusing on diet, lifestyle and disease prevention in their practices. Patients, they say, are hungry for concrete advice.

Dr. Lorrie Elliott, who works at Northwestern Memorial Hospital in Chicago, says the conference has taught her new ways to approach healthful eating with her patients.

"I'm going to say, 'Look at all the great new things you can try. And here are some practical strategies for it,'" Elliott says.

"Is anyone here tired of black beans and rice yet?" asks Culinary Institute instructor Tucker Bunch.

Inside a CIA demonstration kitchen, Bunch helps the conference attendees prepare quinoa and faro, two types of whole grains. The grains cook up just like rice, but they have more texture and flavor.

Bunch adds some edamame, explaining that soybeans are loaded with nutrients. He finishes the plate with some baked chicken and fennel, and the meal is complete.

Bunch says that when people cook dinner, they should make enough for four meals — not just what's going on the table that night.

He demonstrates how leftover veggies and chicken from one dinner can be transformed into a hearty soup for the next night by adding vegetable stock. Then Bunch makes a salad, served cold, by adding yogurt. Another plate is a drumstick with the vegetable mix on the side.

"So now I've got four meals with a simple preparation of grains, (which) I cooked in one pan," he says.

Hauser says she enjoyed working as a professional cook, and that as a physician, she seems to be leaning toward educating people about food.

Her biggest "aha" moment, she says, came a few years ago when she was teaching community cooking classes. Her students didn't have much experience in the kitchen.

"They'd come back ... and say their blood pressure had improved," says Hauser. "Or they'd name some other health benefit that had come from it. And they were just cooking what they loved."

It was Hippocrates who said, "Let food be your medicine." But Hauser's approach isn't far off.

For all the recipes from the Healthy Kitchens, Healthy Lives Conference, click here