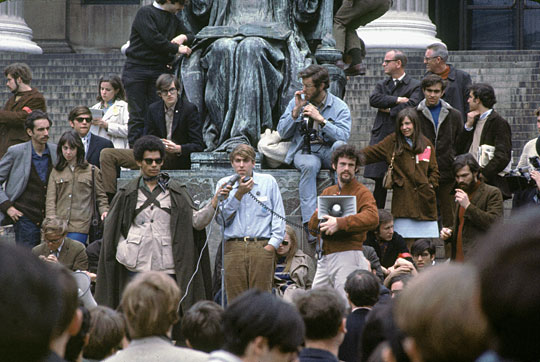 Mark Rudd (center), president of Students for a Democratic Society, addresses students at Columbia University on May 3, 1968.

NPR's Robert Siegel was an anchor at WKCR, Columbia University's radio station, in 1968. Read his recollection of reporting on the student protests. 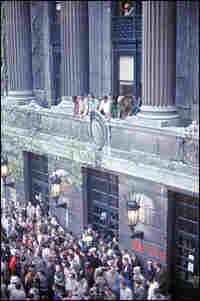 Students spill out of a building at Columbia University, where civil rights and Vietnam war protests led to arrests in April 1968. Hulton Archive/Getty Images hide caption 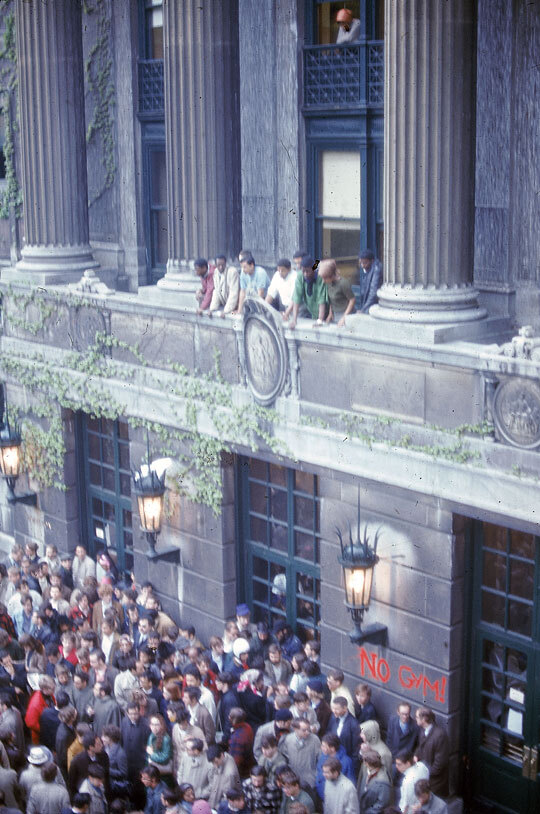 Students spill out of a building at Columbia University, where civil rights and Vietnam war protests led to arrests in April 1968.

Forty years ago, Columbia University was a frequent scene of demonstrations against the Vietnam War and the university's relationship with its surrounding New York neighborhoods. Now, scholars and many involved in those protests disagree about their impact.

One source of contention was a university gym under construction in nearby Morningside Park. Black Harlem community activists, along with both black and white Columbia students, opposed it because they believed neighborhood residents would get only limited access to the facility being built on public land. On April 23, 1968, about 150 students and community members marched to the construction site and tore down a section of fencing. Then they moved on to Hamilton Hall, taking over the building and taking as hostage Columbia's acting dean, Henry Coleman.

Meanwhile, another issue drew some students' ire. Members of the radical group Students for a Democratic Society opposed Columbia's ties to a think tank involved in weapons research for the Vietnam War.

Mark Rudd, then-chairman of Columbia's SDS chapter, tied the two issues together, saying at the time that students would not attend a university that exploited black people and developed weapons to kill them and murder the Vietnamese.

Within days, five buildings were occupied. Some students held counterprotests, calling for university life to return to normal. There were attempts to negotiate and mediate; the administration agreed to suspend work on the gym but refused amnesty for student protesters. On April 30, police moved in and cleared the buildings, arresting 712 students. More than 100 students, four faculty members and a dozen police were injured in the fracas. Students called a strike, and the campus shut down for the rest of the semester.

Today, Rudd is a retired math teacher who remains proud of his role in the protest movement.

"I see it as part of the enormous part of the anti-Vietnam War movement involving millions of people," says Rudd, who lived underground as a revolutionary for seven years. "We stopped a war of aggression."

But Rudd's perception of the movement's impact is not shared by Allen Silver, a sociology professor who has taught at Columbia since 1964.

"The army of North Vietnam stopped the war, because it imposed costs on the American polity and society that it was not prepared to bear," says Silver, who believes Rudd is deluding himself.

Silver contends the student radicals' view — that the university was part of an evil, imperialist system and deserved to be overthrown — was deeply destructive.

Silver contends the student radicals' view — that the university was part of an evil, imperialist system and deserved to be overthrown — was deeply destructive. He says various protests "played into the hands of the Nixonian repression" and helped the arguments of conservatives who followed — from Ronald Reagan to George W. Bush.

Many former Columbia activists of the time take issue with Silver's account.

Louise Yelin, who is married to Friedman, teaches literature at the State University of New York at Purchase. She believes the Columbia protests fueled continuing movements for change: civil rights, the environment and most important to her, feminism.

Yelin saw 1968 as a year of momentous change, "a spur to a new way of looking at the world and also to a feminist movement that changed our lives in many ways," she says.

On April 23, 1968, students involved in Students for a Democratic Society (SDS) and the Student Afro Society took over buildings at Columbia University in New York City. Their cause? Civil rights and opposition to the war in Vietnam. Columbia's radio station, WKCR, reported live from each occupied building. NPR's Robert Siegel worked at WKCR at the time, and here he reflects on those live reports.

I remember them very well.

I was the anchor of the station's coverage.

I was a college senior. I had spent far too much of my time at the radio station. And when the demonstrations began, and students took up physical positions that reflected their politics — protesting inside a building, counterprotesting outside, trying to mediate, trying to study-- I took up my position behind the microphone.

We covered what was suddenly a national news story, and we knew that story better than the seasoned professionals who descended upon us.

We tried to cover it as straight as we could, which meant some tense moments both with striking students and with the university administration. People praised us; people complained about us, but above all, people listened to us, and they relied on us.

For me, that was a first.

It was also my first experience with chaos. All rules were violated. And in such chaos, all sorts of fantastic ideas gained credence. No exaggeration was off limits.

When the Sorbonne in Paris erupted in protest at the same time — in what would eventually be a national strike — some Columbia students figured it must be a strike in sympathy with them.

One student I knew was exasperated. Why hadn't the blacks in Harlem started rioting in sympathy with Columbia students opposed to the gym in their park and a war that their sons would likely not be able to stay out of?

Some SDS members saw the sudden radicalization of kids who had been witnesses or victims of police brutality, and they put two and two together and got: Nineteen. America was on the verge of revolution, they reasoned, provoke more Columbias, more police crackdowns, and then more radicals would emerge. The Weather Underground came of that.

Of course, just a handful of people became urban terrorists.

And that's the enduring impression I have of those events: How few people it really takes — a few impetuous activists, one aloof and insensitive university president, cops who abandon discipline, the protestor who destroys a professor's papers — how very few people it takes to ignite a crisis, to create chaos and to write a piece of history.

For 1968, which was a time of war, assassinations, protests and riots, the chaos at Columbia epitomized the state of things. I remember that time, I was shaped by it.

But I certainly don't miss it.

The Return of the Students for a Democratic Society Jan. 30, 2006