Accessibility links
Show-Stopping Aria Encored at the Met There is an unofficial moratorium on taking encores at New York's Metropolitan Opera. But tenor Juan Diego Florez broke the 14-year old ban Monday night, singing 18 high C's back to back.

From Monday night's production of La Fille du Regiment at the Metropolitan Opera, Juan Diego Florez sings the aria "Ah, Mes Amis," with its nine high C's. And then he sings it again!

Courtesy of the Metropolitan Opera 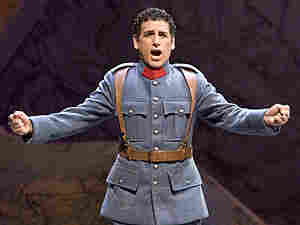 Tenor Juan Diego Florez as Tonio in the Metropolitan Opera's production of La Fille du Regiment by Donizetti. Florez is the first in 14 years to break the ban against encores at the Met. Ken Howard/Metropolitan Opera hide caption

Monday was an unusual night at the Metropolitan Opera in New York.

It wasn't so unusual that tenor Juan Diego Florez dazzled the audience with nine high C's in a row in the aria "Ah, Mes Amis," from Donizetti's La Fille du Regiment. And it wasn't unusual that the crowd went crazy.

But then Florez did something that hasn't been done at the Met in 14 years--he sang the aria again.

Peter Gelb, general manager of the Met, says that stopping the show for an encore has generally been forbidden.

"In the '20s and '30s and '40s, there was wording in the program books admonishing the audience with words saying 'positively no encores allowed,' kind of like no-smoking signs."

But since Gelb took over the Met in 2006, he's been credited with loosening the company's buttoned-up reputation by beaming live productions into movie theatres and generally trying to usher in a new more hip era.

"For me, and for the audience at the Met," Gelb says, "it's very important that opera be a theatrically satisfying and thrilling experience, and if the audience has a great time with a singer singing an aria like this, with an incredible run of nine high C's, and they want to hear more of it, why not?"

Gelb knew that Florez had encored the aria at Milan's La Scala opera house last year. He told the Peruvian tenor that if he wanted to take an encore this time the Met would not stand in his way.

The last singer to encore an aria at the Met was Luciano Pavarotti, who repeated the third act tenor aria from Puccini's Tosca in 1994.

So is the encore ban at the Met over? Gelb doesn't want to turn the Met into a circus. Every situation, he says, has to be judged on its own merits.

"This particular aria is one that is calling out to be encored. I think Donizetti must have written it with an encore possibility in mind, because it really is like running the marathon and wining the gold medal for any tenor who can accomplish it."

On Saturday, the Met's Donizetti production will be seen by more than 100,000 people in 17 countries, according to Gelb.

"I don't know what will happen on Saturday, but if the audience in the opera house applauds as enthusiastically as they did Monday night, I would not be surprised if an encore of the encore took place."