Accessibility links
Sister Band Smoosh Rocks Kids-at-Work Day The three Seattle sisters — ages 11, 14 and 16 — have opened for Pearl Jam, Death Cab for Cutie and Sleater-Kinney. This week, they performed an acoustic version of a new song in a cubicle at NPR. Watch video of the Smoosh mini-concert. 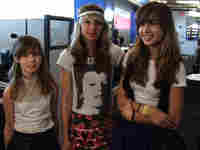 Smoosh is a band of three sisters, all born after Bill Clinton was first elected president, Michael Jordan was in his prime and Nirvana released its ground-breaking album Nevermind.

This week, the Seattle-based trio stopped by the BPP offices, where they performed acoustic versions of two new songs — in a cubicle.

The idea was to mark the nation's annual Take Your Daughters and Sons to Work Day. The occasion started as a way to get kids, particularly girls, valuable time in their parents' workplaces. In some quarters, it's considered an unavoidable burden in corporate life.

Some workers complain about being distracted by the noise of youngsters — not to mention the racket of a rock band. Others have been pressed into service entertaining the tots.

The girls in Smoosh are able to entertain not just themselves, but the entire Bryant Park Project office.

Asya, 16, plays the keyboards, sings lead and writes the lyrics. Chloe, 14, plays the drums and also sings. They arrange the songs together. Maia, 11, just joined the band last summer as the bass player.

They may be young, but the trio has already opened for Pearl Jam, Death Cab for Cutie and Sleater-Kinney.