Accessibility links
Calif. Lawmaker Seeks Law to Ban Lapdogs in Cars Republican State Assemblyman Bill Maze has introduced a bill to outlaw Californians from driving with a dog or another pet in their laps. That could cramp the style of people like Paris Hilton, who has been seen driving with her Chihuahua Tinkerbell in her lap. 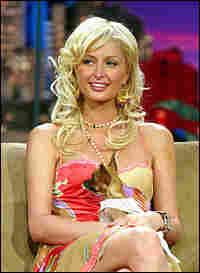 Socialite heiress Paris Hilton with her Chihuahua Tinkerbell on 'The Tonight Show with Jay Leno' in September 2004. Hilton has been seen driving with Tinkerbell in her lap. Kevin Winter/Getty Images hide caption 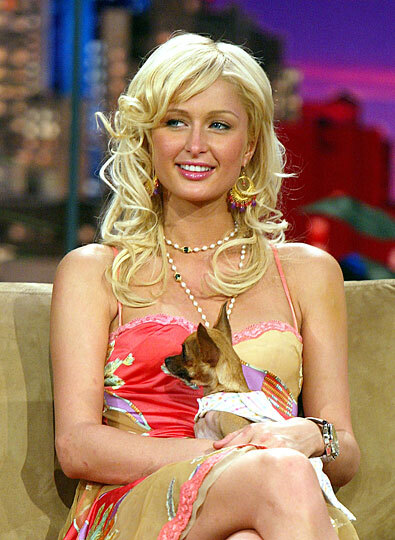 Socialite heiress Paris Hilton with her Chihuahua Tinkerbell on 'The Tonight Show with Jay Leno' in September 2004. Hilton has been seen driving with Tinkerbell in her lap.

Britney Spears and Paris Hilton have done it, and so have many lesser-known Californians: They've tooled around town with pets on their laps.

Now, a California lawmaker is looking to get Fido out of the driver's seat.

State Assemblyman Bill Maze (R-Visalia) wants to ban pet owners from driving with animals on their laps. Last week, a bill that would do just that passed the state's Assembly Committee on Transportation. The state Assembly may take up the measure, which Maze wrote, next week.

Maze says pets are a distraction that could put motorists at risk, much like talking on a cell phone. In July, it will be illegal for the more than 30 million drivers in California to talk on a cell phone without a hands-free device.

If his bill passes, drivers who are caught with their Chihuahuas or calicos unrestrained will have pay a penalty. The bill does not specify how drivers should keep their pets in place.

"If you've got a live animal, which you're not able to control, and that thing gets between you and the steering wheel or underneath your brake pedal, you've got a problem," Maze says.

Not everyone is thrilled at the prospect of legislation, including Johnnie Bonds, who hangs out at a hilltop dog park in Culver City with his Chihuahua mix Shorty. He says he doesn't even like being told he has to wear a seatbelt, let alone his dog.

"The government should get out of my business, you know what I mean?" Bonds says. "Let me live my life my way, with what little freedom we have left."

Patrick Guilfoyle, who owns Double Dog Dare Ya, an upscale boarding facility in Burbank, says people don't realize how dangerous it can be to leave their pets unbuckled.

But at the same time, he understands how hard it can be to resist a freedom-loving pet's pleading eyes.

"They don't understand that dogs are at risk just the way a child would be at risk if they were unrestrained in a car," Guilfoyle says. "I am truly as guilty as the rest of them. I insist that they stay in the back seat, but that's as far as I've gotten."

The Society for the Prevention of Cruelty to Animals in Los Angeles has been lobbying for years to get the state Legislature to pass measures along the lines of Maze's bill.

If the legislation becomes law, Bernstein says, tails might droop a bit at being confined, but pet parents will have to draw on their inner strength.