Accessibility links
Cloud Cult: Musical and Visual Instruments The large Minneapolis-based band has earned a reputation for playing each of their sets with a multimedia component: Live painting. The group visits WNYC's Soundcheck for an interview and studio performance. 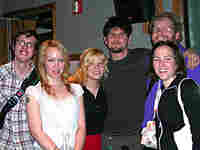 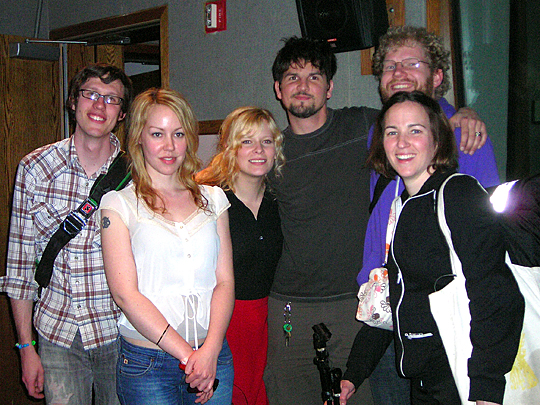 Cloud Cult in the WNYC studios.

Everybody Here Is a Cloud

The Story of the Grandson of Jesus 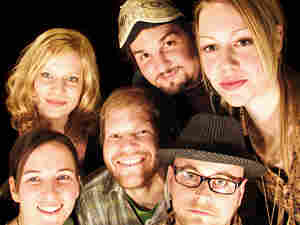 When the band Cloud Cult goes on the road, they lug around the usual cargo of guitars and amps. But on top of that, they must also account for the easels and brushes of the band's artists.

The large Minneapolis-based band includes live painting on stage in a multimedia performance that has earned them a unique reputation in the indie music world. The band visits WNYC's Soundcheck — unfortunately, sans canvas — to play songs from the band's latest album, Feel Good Ghosts (Tea-Partying Through Tornadoes).

Though the band didn't bring their easels to the studio, during each performance their artists create a new painting to be auctioned off at the end of the set. Band leader Craig Minowa says the artists are just as much a part of the group as their musicians.

"It just seems like an aspect that's critical to a good show," Minowa says. "We've always wanted to do it in a sort of multi-sensory sort of presentation, so [the artists] are both band members — they just play visual instruments."

Connie Minowa, Craig's wife and an artist in the band, says their original artwork bears some relation to the music.

For Cloud Cult, Feel Good Ghosts is a more joyous, happy album compared to other recent efforts. Craig Minowa turned to songwriting after the 2002 death of his son Kaidin, and much of the band's material since then has grown from that experience. He says that while Kaidin still weighs heavily on his mind, his music has reached a different place.

"It feels like we've come full cycle now," Minowa says. "We're in a rebirth phase; Connie and I are ready to start a family again ... It's sort of like we've been reborn and we're ready to really suck the marrow out of life again."

"It's not a business; we're not looking to make a profit on it," Craig Minowa says. "From the first album that we released in the late '90s, it was built out of necessity because there weren't any manufacturers out there that were making environmentally-friendly CDs. Now there are some companies that are doing a great job, and some of the bigger record companies are actually starting to step up to the plate too."