Accessibility links
Tom DeLay: 'No Retreat, No Surrender' Tom DeLay, the former House Republican chief, defends his and the GOP's leadership during its 12 years of power in Congress and says he will continue to fight charges that he misused campaign money. 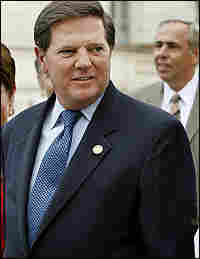 "If the conservatives don't get their act together ... I think Hillary Clinton will be the next president of the United States."

Hear DeLay's Evaluation of the Race

'No Retreat, No Surrender'

Tom DeLay, the former House Republican leader who stepped down last year amid allegations he misused campaign money, defends his and the GOP's leadership during its 12 years of power in Congress.

DeLay rebuts his predecessor and fellow Texan, former House majority leader Dick Armey, who said in an NPR interview last year that the Republicans had lost their way, putting their interests in staying power over the good of the country.

"We did as much as we could to support a conservative cause with the votes that were available to us and we accomplished some pretty amazing things with very small vote margins," DeLay tells Steve Inskeep.

DeLay, whose new memoir is called No Retreat, No Surrender, says he will not accept a plea agreement in the Texas campaign-finance case against him, "no matter what."

"I'm not guilty of anything," DeLay says, "and I will not succumb to the Democrats' criminalization of politics. I think it's incumbent on me to fight the politics of personal destruction that I've been living through for 12 years."

DeLay says he relished the business of "counting votes," but he doesn't miss being in the congressional leadership.

"It was time for me to go," he says. "If you'll remember, I was the only leader that lasted the whole 12 years. And it's a pretty grueling job – to be in leadership and driving an agenda against all the odds. And I was getting tired."

Excerpt: 'No Retreat, No Surrender' 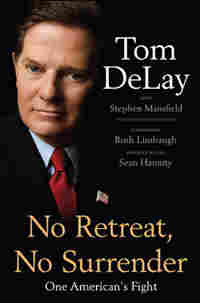 It does not bother me that people think I'm corrupt; that can be disproven when I get to court. What bothers me is that people think I'm stupid. Would I, the most investigated man in America, really be so foolish as to take an illegal, high-profile trip and give my enemies a weapon to hurt me with? No, I would not, nor have I ever accepted any illegal travel.

Let's start at the beginning, though. I believe in the private sector. I love the free market, and I think that business is not an evil in our nation but one of the great engines of betterment for human beings. On the other hand, I believe that government ought to be small, and as light a burden as possible on the backs of the people. Therefore, when I travel, as a congressman must, I would prefer that private money fund the trip if possible, rather than the taxpayers.

Many politicians feel differently. They love traveling on the public dime and take CODEL—short for "Congressional Delegation"—trips by the dozens. I disagree. I would rather a private foundation fund my travel if at all possible, and so I've taken very few CODELs in my twenty-two years in Congress. In fact, I haven't traveled very much at all. In one ten-year period while I was in Congress I only traveled out of the country twice.

The press and their liberal lords have worked hard to paint my travel as some sinister conspiracy. For them words like "corporate," "lobbyist," and "private" are vile. For example, in 2000 I took a trip to Scotland and England at the invitation of conservative politicians in those countries. They wanted to learn how we had won such a great victory in 1994, and how we had accomplished the Contract with America. It was a wonderful experience. We flew on a private plane and held miniseminars with our fellow conservatives overseas, and I had the privilege of meeting with Margaret Thatcher, one of my heroes. I also got to play a few rounds of golf, which I try to do as often as I can when I travel. On this trip I had the once-in-a-lifetime opportunity to play at St. Andrews, the legendary birthplace of golf and a mecca for all true players. The trip was paid for by the National Center for Public Policy Research and was completely aboveboard.

When I returned home, you would have thought I had joined Al Qaeda. The press talked about the trip like it was part of a conspiracy to overthrow the government, and the House Ethics Committee was asked to investigate. Of course, there was nothing unethical about it at all. I urged the Ethics Committee to address the charges, but they never did. Still, because Americans have been trained by the press to conclude that a congressman holding a cigar and a golf club while on a privately funded trip must be plotting evil, the aura of impropriety hovers over this trip and a number of others I have made.

And what about those political favors? Well, they didn't exist. But let me take this whole issue a bit further. A congressman only accepts trips to study an industry or a cause if he is already somewhat committed in the first place. If I'm interested in helping the nursing home industry or airplane manufacturers or construction workers, I'll travel to study their issues only because I already lean toward serving them in some way. So if I return to the floor of the House and vote for legislation that aids construction workers, this doesn't mean I've done anything illegal or in any way contrary to the best interests of the nation. In fact, I've served the country by giving an informed vote.

One more thing: Because liberals and the press are influenced by socialism's hatred of the private sector, they speak of business people and corporations like they are the evil empire. Not only is this a silly lie that defies history and reason, the vital truth is that a congressman is sworn to represent the people in private industry just as surely as he is public school teachers and policemen. Not only should we be thankful for what the private sector has accomplished in this country, we should start recognizing that those who work in that sector have a right to political representation also. A close look at their spending on political lobbying will reveal that they actually spend less than labor unions do to achieve their political goals.

So yes, I took a trip to Scotland. Yes, I played golf. Yes, it was privately funded. And yes, it was both legal and informative. If I had the opportunity, I would do it again.

Reprinted from No Retreat, No Surrender: One American's Fight, by Tom DeLay, by arrangement with Sentinel, a member of Penguin Group (USA) Inc. Copyright (c) First Principles, LLC, 2007. 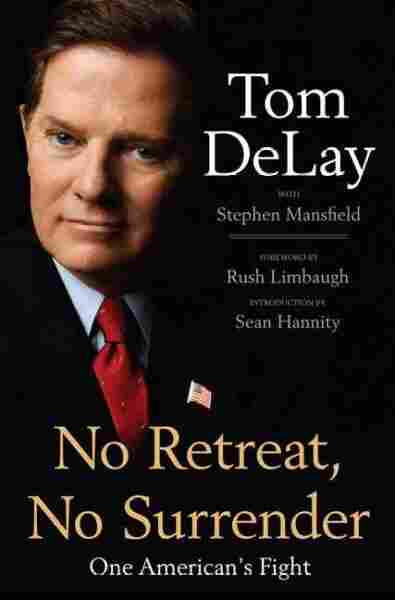 No Retreat, No Surrender

by Tom DeLay and Stephen Mansfield