Accessibility links
San Francisco Bar Turns Happy Hour 'Green' Elixir, located in the Mission District, is the first bar to be certified by the city as a green business. In addition to serving local beers and biodynamic wines, it specializes in eco-friendly cocktails. 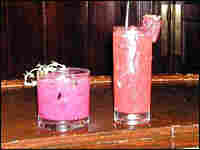 Sayulita (right) and the Country Thyme (recipe below) may not look green, but Elixir owner Joseph Ehrmann insists they are. Alex Cohen, NPR hide caption

Cut the lemon in half, leaving the peel on.

Cut one half of the lemon into pieces and put it in the bottom of a 16 oz. mixing cup.

Put a handful of fresh, organic blueberries over that.

Muddle the mixture so that all of the juices come out.

Pour in 1.5 oz of vodka and a dash of agave nectar. Fill the rest of the cup with ice.

Take a piece of thyme and give it a good slap to release the oils. Even if it seems strange, do it. It's important.

Put the thyme in the bottom of a glass with some ice.

Shake the glass with the lemon juice, blueberry and vodka mixture well.

Pour into the old-fashioned glass.

Alcoholic beverages can take a toll, not only on one's liver but also on the environment. That's why bartender H. Joseph Ehrmann says he decided to open a bar in San Francisco with an environmental conscience.

Elixir, located in the Mission District, is the first bar to be certified by the city as a green business. In addition to serving local beers and wines, Elixir specializes in environmentally friendly cocktails like the Country Thyme, a sort of blueberry lemonade made with fresh thyme and Square One vodka.

Square One is Ehrmann's vodka of choice because of the company's ultra-green approach.

"It's a vodka made from organic rye that's farmed from North Dakota," Ehrmann says. "The distillery is in Idaho, and the distillery uses water from the Snake River that runs just below the distillery."

Labels made from tree-free paper and soy ink are applied to the bottles after they're filled with vodka.

"Biodynamic is more of a holistic approach to farming," he says. "It's about understanding how the earth works and fitting what you're growing into that specific location, rather than forcing the earth to grow what you want to there."

Besides alcohol's production, though, its transportation takes a toll on the planet, Ehrmann explains.

In California alone, transporting wine imported from France creates more than 10 million pounds of pollution each year, according to the Natural Resources Defense Council.

Putting wine in something lighter than glass bottles is a greener alternative, but most oenophiles aren't quite ready to order their favorite pinot out of a box or bag.

That may change in the future, Ehrmann says, as the popularity of green bars grows. A group calling itself Green and Tonic recently asked him to serve as a sustainability consultant to other bars in San Francisco. Several other neighborhood watering holes hope to become certified green businesses within the year, he says.