Accessibility links
Man Man Captures Live 'Habits' Philadelphia's Man Man has earned a reputation for wearing face paint and dressing all in white during its explosive and energetic live shows. The band attempts to emulate that approach on the new Rabbit Habits.

Watch a Video of Man Man in Concert 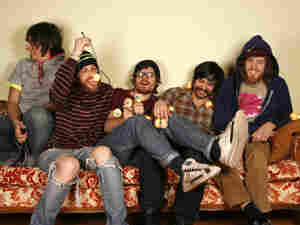 At first glance, it's easy to mistake the rock band Man Man for a cricket team circa 1974. Its members dress all in white and sport large beards and moustaches. Musically, the group is often compared to Tom Waits and Frank Zappa. And, like their musical idols, Man Man's members are serious about their craft.

On stage, Man Man lurches from one song into the next, switching instruments on the fly. There are no jokes between tunes and no friendly banter — no one even talks to the audience until the set is over.

Lead singer Ryan Kattner says that Man Man's members "spend a lot of time constructing a set that has a nice ebb and flow to it," an approach born of necessity. "We learned early on that if you just play through your set — no breaks — you don't hear people heckling you," he says.

"It's like a punch to the face for 30 minutes," drummer Chris Powell adds. "It's great."

With so much happening on stage, Powell and Kattner say, the band doesn't want to distract from it visually. So they all wear white. "By the end of the tour, we're all beige in color. You know, it's going for that Lord of the Flies prep-boy look," Kattner says.

The band members embrace that theme by painting their faces and adopting adolescent, tribal-sounding stage names like Honus Honus and Pow Pow.

"Everybody thinks that they're a joke band, but they're really not," says Jessica Suarez, a music writer for Pitchfork and Fader. "If you listen to their lyrics, they're super-emotional lyrics." Suarez says that if you look past the funny names, the face paint and the smelly outfits, you'll find a band working some rich emotional terrain.

"Boy meets girl, girl dumps boy, boy takes her back and she changes her mind again," Suarez says. "So even if you're hearing xylophones and guys screaming in the background and this crazy like organ, it's still kind of a basic broken-hearted love song. That happens across so many of their songs and their lyrics that I almost thought of as the thesis of Man Man."

That mentality could easily describe the band's off-stage history, too. Kattner started Man Man in 2000 and put out an album four years later. Then everyone else quit.

"There've been a lot of people in this band," Kattner says. "It's just a lot of learning. You know, growing pains."

Instead, Kattner tried again. The new Man Man lineup put out the critically acclaimed Six Demon Bag in 2006, but the band soon left its label and put up the money for the next recording itself. The risk paid off when it found a new label: Anti-, the home to Tom Waits. Critics point out that Kattner's vocal style owes a big debt to the older singer. It's a charge Kattner doesn't exactly deny, but he maintains that it's the only way he can get the job done.

"When I was in second grade, someone came in and asked who wanted to be in choir," Kattner says. "All these little girls raised their hands. And I was like, 'Oh yeah, man, choir.' But then I was so self-conscious that I didn't even sing; I just lip-synched for a year and a half. I know I don't have the best singing voice, but what can I do? You have to make do with what you can."

Man Man makes do by touring a lot. On the road almost nonstop for the past three years, including a stint opening shows for Modest Mouse, the band launched its current tour by selling out midsize clubs in Philadelphia, New York and Boston. Chris Powell says that some of Man Man's fans have even been showing up in costume.

"Kids will show up in all white," he says. "That's a little more rare."

If you don't believe them, go see for yourself. Man Man plans to be on the road for most of the year.