Accessibility links
Adapting to the Possibilities of Life When Dr. Donald Rosenstein discovered his son was autistic, he grieved the loss of many of his own dreams. But in watching his son grow, Rosenstein came to believe in the ability people have to adapt to, and even find joy in, difficult circumstances.

Listen
Adapting to the Possibilities of Life 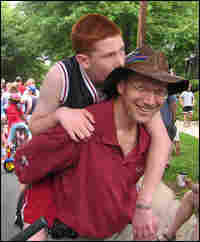 Dr. Donald Rosenstein is the clinical director of the National Institute of Mental Health, specializing in psychiatric care of the medically ill. His 16-year-old son, Koby, has autism. Photo courtesy of Donald Rosenstein hide caption 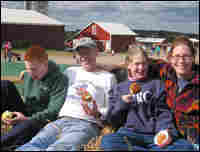 Koby is "a sweet and beautiful boy," Rosenstein says, "and together we've been on a journey into frightening and unknown territory." Rosenstein and his family live in Bethesda, Md. Photo courtesy of Donald Rosenstein hide caption 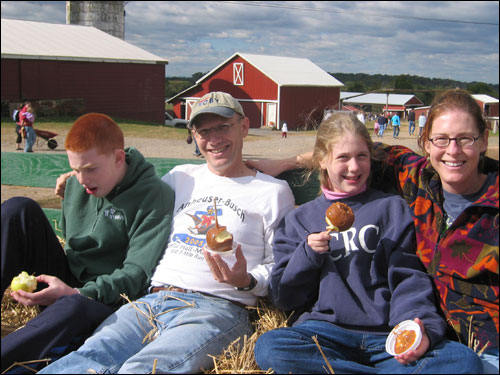 Koby is "a sweet and beautiful boy," Rosenstein says, "and together we've been on a journey into frightening and unknown territory." Rosenstein and his family live in Bethesda, Md.

I believe in adaptation — that is, the same stimulus does not invariably elicit the same response over time.

The first time I saw my son flap his arms, I nearly threw up.

My son Koby was 2 at the time, and he and my wife and I were at an evening luau in Hawaii. Dancers emerged from the dark twirling torches to loud, rhythmic drumbeats. I thought it was exciting and so did Koby. He began to flap his arms — slowly, at first, and then with an intensity that mirrored the movement of the dancers.

In an instant, I was overwhelmed. I knew just enough about arm-flapping to know that it was characteristic of autism. I was confused, panicked and strangely preoccupied with the fear that I would never play tennis with my son as I had with my father. That one movement took on immediate, powerful and symbolic meaning: Something was terribly wrong with my boy.

Koby is 16 years old now. He lost his language, developed epilepsy and has struggled profoundly. We've all struggled, including Koby's little sister, Emma. But we've also adapted. Koby still flaps his arms and he's got the thick, muscular upper body one would expect after 14 years of isometric exercise. He's a sweet and beautiful boy, and together we've been on a journey into frightening and unknown territory. Like any fellow travelers, we've learned from each other and grown.

Koby's arm-flapping means something different to me now. It means that he's interested, tuned in and present in the moment.

That Koby has autism is old news at this point. We've grieved, survived and adapted. We've learned to be more patient, to celebrate more modest victories, and to connect with Koby whenever and however we can. Now, when Koby flaps, I'm happy for him and what it means about his engagement, not sickened by what it might mean for his and our futures.

I believe that this lesson in adaptation has been one of Koby's greatest gifts to me, to our whole family. I've seen it as Emma's embarrassment over her brother's condition has faded and been replaced with compassion for those who struggle. And I've seen the influence of Koby's lesson in my own work, helping patients cope with illness and tragedy in their lives — like my patient who can finally celebrate her father's memory after years of debilitating grief that came with every anniversary of his death.

Last summer, Koby had a delirious romp in the ocean alongside Emma. Koby flapped his arms wildly in anticipation of each coming wave. Not quite the family beach day we had once envisioned, but a spectacular moment nonetheless.

I believe that "reframing a problem" can help to overcome it. But adaptation is not the same as becoming tolerant of or inured to something. Adaptation allows for creative possibilities. Koby has adapted to us and we to him, and through this process our family has discovered deep and meaningful connections with each other — connections we never thought possible.

Editor's note: Dr. Donald Rosenstein said that he suspected his young son had autism when he saw him exhibit arm-flapping behavior. Many healthy young children wave their arms in excitement. The diagnosis of autism should be based on a thorough medical and developmental evaluation. A diagnosis of autism cannot be made based on the presence or absence of any one symptom.