Accessibility links
Evidence Said to Link Syrian Reactor, North Korea CIA officials brief Congress about video and photo evidence that a secret facility in Syria was a nuclear reactor near completion, and that North Korea was assisting in the project. Israeli aircraft bombed the complex last year. 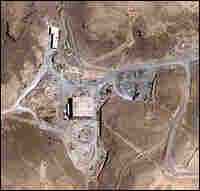 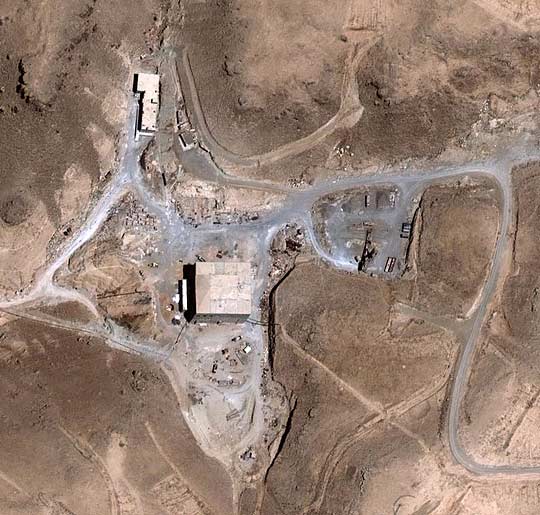 The Bush administration told U.S. lawmakers on Thursday that a site in Syria that Israel bombed in September was a nuclear reactor in the final stages of construction and that it was built with the help of North Korea.

The White House said there was "good reason to believe the Syrian reactor was not intended for peaceful purposes."

Tom Gjelten, NPR's U.S. diplomacy and military affairs correspondent, tells Melissa Block that intelligence officials at the briefing were trying to make three points: that the facility was a nuclear reactor meant to produce plutonium; that it was built with North Korean help and modeled after a reactor in North Korea; and that the purpose of the Syrian facility was to create fuel for a nuclear weapons program.

Gjelten says the officials are confident in the first two points, but don't have strong evidence to support the belief that the reactor was intended to create fuel for a bomb.

The officials offered photos taken inside the facility — presumably by an Israeli spy — that show it was a nuclear reactor. There were no photos of North Koreans inside the plant. There was, however, a picture of a senior North Korean official involved in the nuclear program in Syria meeting with Syrian officials.

U.S. officials said they did not know about the Syrian facility until they received initial intelligence from Israel, and that the U.S. did not give Israel a green light for the September raid.

The administration said it did not brief lawmakers about the facility until now because Syria might have retaliated against Israel and that there was a danger of a regional confrontation.

The issue of North Korean involvement in the Syrian reactor arises just as the U.S. and North Korea are said to be close to an agreement on the future of the Asian nation's nuclear program.

Gjelten says the reason for Thursday's briefings is that "some Republicans in Congress who are very anxious to get this information out said that the approval of a deal with North Korea was unlikely to go forward unless the administration came clean on what it knew about North Korea's activities in Syria."