Accessibility links
A Tough, Yummy Cookie for ANZAC Day The Australian and New Zealand Army Corps took heavy losses in World War I. Today, those countries remember their fallen by serving the kind of cookies families shipped to loved ones on the battlefield. BPP's technical director serves up the hearty ANZAC Day treat. 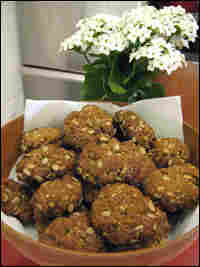 The ANZAC cookie was designed to stay fresh on long trips to the front in World War I. Dan Pashman, NPR hide caption

Today is ANZAC Day, Australia and New Zealand's version of Memorial Day or Veterans Day. The Australian War Memorial Web site explains that it's "the most important national day of commemoration for Australians." (ANZAC is the Australia New Zealand Army Corps.)

On April 25, 1915, during World War I, ANZAC forces landed at Gallipoli in Turkey. The mission eventually led to a devastating defeat that remains seared in the minds of many Australians and New Zealanders. It was depicted in the 1981 film Gallipoli, featuring a young Mel Gibson, and it's the subject of the famous Australian folk song, "The Band Played Waltzing Matilda."

Folks Down Under have found a way to put a sweet touch on this somber occasion. They make ANZAC cookies, or, as they call them, ANZAC biscuits. In fact, the Australian government won't lend the ANZAC moniker to anything called a cookie — only biscuits.

ANZAC biscuits were designed to be sturdy, so they could be shipped the long distances from Australia and New Zealand to battle lines around the world. But, as Bryant Park Project staff learned this week, they're also designed to be delicious. BPP technical director Manoli Wetherell was born in Australia, and she brought some in. She also shared her recipe.

Heat oven to 350 degrees. Combine the flour, oats, coconut and sugar in a bowl. Melt the butter and Golden Syrup (or honey) in a saucepan over low heat. Mix the baking soda with the water and add to the butter and Golden Syrup. Pour the liquids into the dry ingredients and mix well. Mixing is most easily done with your hands. Roll up dollops about the size of walnuts and place onto a greased cookie sheet. Press down lightly so they are not totally round. Leave room for the cookies to spread out as they cook. Bake for 12 to 15 minutes, depending on your oven. Cool on a wire rack and seal in airtight containers.