Wait Till You See Him [De-Phazz Remix] 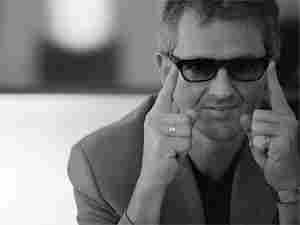 The music of German DJ Pit Baumgartner — a.k.a. De Phazz — is a bit hard to categorize. Calling it "jazz with a turntable," De Phazz samples and remixes music he finds just about anywhere, from Ella Fitzgerald hits to 10 cent flea market records. The outcome is both surprising and seamless.

Baumgartner plays a hybrid of electronic dance music and jazz while touring with his band and recording albums, but most of the time he works as a remixer — most notably for the Verve Remix Series — reworking classic songs by Ella Fitzgerald, Kurtis Blow and Boy George.

Baumgartner describes himself as more of a musical collage artist than composer or instrumentalist. "It's a collage thing. I love to bring things together that normally don't fit." he explains. "My music, it joins you while you are doing something. It gives you space to not listen to it immediately or constantly. But if you listen to it constantly and deeper, you should have some little pearls to find."

The artist's latest album is Tales of Trust, a solo effort that gave Baumgartner the freedom to move beyond the live band format. He says experimenting with the song dictates how it will turn out. "At a certain point the song gives you the direction. The song tells you 'listen I need a trumpet' or 'I don't need nothing, I'm an instrumental song' and then it goes by itself."

It's those combinations that Baumgartner finds most interesting. He says, "I don't think that somebody really invents new music. I don't think that's possible. There's so much music — in the train, the supermarket and the airport. I can't really tell you, 'Am I composing this or did I hear this just two days before somewhere?'"